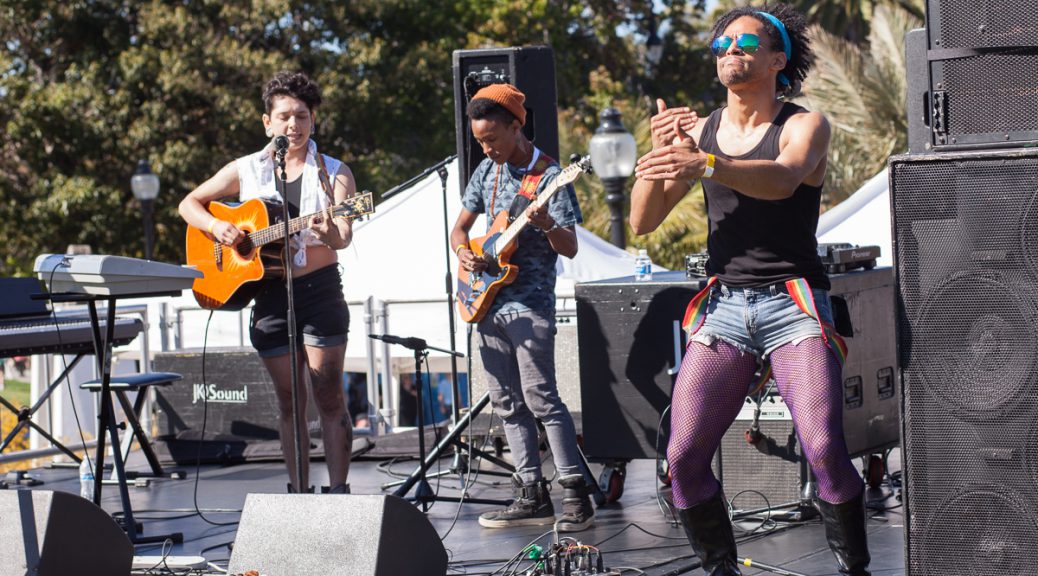 On Friday, I attended the San Francisco Trans March for the third consecutive year. I’ve come to prefer this volunteer-run, safe and sober event to other activities on Pride Weekend, which here in SF have become opportunities for corporate pinkwashing and for straight tourists to drink copious amounts of alcohol while gawking at us.

As I did last year, I decided to concentrate my photography solely on the stage performances before the actual march. I visited the information booth upon arrival at Dolores Park to ask for a list of speakers and performers. They responded by offering me a press pass! I said I was an independent blogger, not really a member of the press, but accepted. (They mostly wanted to make sure journalists didn’t take photos of any attendees without their consent; this reminder was printed on the reverse of the press pass itself.) The MCs from the event were familiar to me, as I had photographed two of them before at the Transgender Day of Visibility: Shawn Demmons of the Transgender Law Center, and Nya of the reality show Transcendent. Karlyn “Fairy Butch” Lotney rounded out the trio. The program included a number of musicians,including two young trans girls: Emmie, who also sang last year, and Alicia N.G., who also read a poem she wrote. I teared up while she sang “Where Is Love?” from Oliver, mostly because I was sad that such a young child has to deal with so much hate against people like her, as she expressed in her poetry. Other musical performers included Agatha Varshenka, only the lonely, Nick Lawrence, Cajeta Envinada (pictured at the top of this post), Akira Jackson, and AH MER AH SU, aka Star Amerasu (who I had also photographed at Black Queer Voices Rising). [Image: A singer/guitarist from only the lonely performs at the Trans March.] Speakers included Mia “Tu Mutch” Satya, who I had also photographed at the Trans Day of Visibility, and Janetta Johnson of the TGI Justice Project. Johnson made headlines by pulling out of today’s Pride Parade as a protest against the increased police presence, which is threatening to black and brown folks. She was accompanied on stage by members of El/La Para TransLatinas, who I’d also photographed at the Transform California launch event and the LGBTQ/Latinx memorial for Orlando. As happened at the vigil for Orlando in the Castro, controversy erupted when elected officials attempted to speak. Theresa Sparks, Mayor Ed Lee’s newly-appointed advisor on transgender initiatives, spoke (uninterrupted) and then introduced state senator Mark Leno. But attendees spotted Lee and Supervisor Scott Wiener on the side of the stage, and began booing loudly. Leno soon realized that the crowd didn’t want any of them there, and made a reasonably classy exit, saying “Though this has not been a warm welcome or one of respect, I will continue to fight for transgender rights, equality, and the respect that you’re not giving us today.” The politicians then exited to a chant of “House keys, not handcuffs,” referring to gentrification and police harassment of homeless and other marginalized folks in San Francisco.

From my reading of the various news articles* and comments on the event, the ire was directed almost entirely at Lee and Wiener, not Leno. However, though Leno is gay (as is Wiener) and has indeed fought for trans rights, he, like Wiener, is a cisgender white man, and cis white gay men are much more well-represented than others in the LGBT community, especially here in San Francisco. Rubbing elbows with disliked local politicians was not looked upon kindly by this crowd.

As an aside, the amount of vitriol I’ve seen expressed at Mayor Lee and Supervisor Wiener makes me wonder how they got elected in the first place, similar to how Hillary Clinton and Donald Trump could have become the presumptive nominees of their respective parties if they are so greatly disliked. Money-influenced corruption is part of why though I do still vote, I do not support the Democratic Party at either the local or national level.

As explained in the Trans March press release, this year’s theme, “Embracing Our Legacy: We Are Still Here,” honors our black and brown ancestors in the movement. The march ended at Turk and Taylor in the Tenderloin district, at the site of the Compton’s Cafeteria Riot. There, a new street sign was unveiled, renaming the 100 block of Taylor Street to Gene Compton’s Cafeteria Way. (I was too tired to take any more photos at that point, unfortunately.)

I was glad to attend this event, and especially happy that Ziggy was able to take a long dinner break to join me for part of it. I also met up with several other trans and non-binary folks for the march and dinner afterward. There were some problems—the sound quality was terrible, and my official Trans March tank top didn’t arrive in time—but overall, it was a positive experience.

My full set of photos from the Trans March is available on Flickr. I also uploaded a number of photos to Wikimedia Commons, to support the annual Wiki Loves Pride campaign to improve LGBT coverage on Wikipedia. Please credit me as Pax Ahimsa Gethen if you use any of them, thanks!

3 thoughts on “Embracing our legacy at the Trans March”