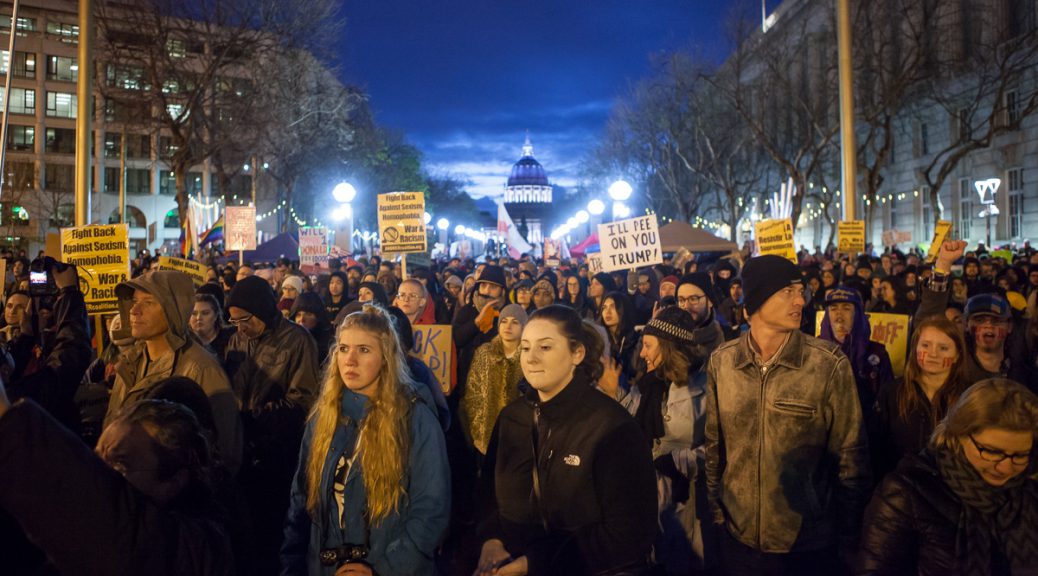 The dreadful occasion has come to pass: Donald Trump has been inaugurated as the 45th President of the United States. What more can I say about this man and the people who voted for him that I haven’t already said? I’ve had to suppress much of my anger, disgust, and fear just to remain functional.

But I cannot simply ignore the impact this transfer of power is likely to have on tens of millions of marginalized people, including myself. So I went beyond my comfort zone this week to attend three crowded San Francisco protests on three consecutive days. [Image: A crowd fills the lobby of the Geary Theater in San Francisco, holding the lit screens of their cell phones aloft.]

Thursday’s event, The Ghostlight Project, was more of a solidarity rally than a protest. People gathered at theaters throughout the country to express inclusion, protection, and compassion. The space inside and outside the American Conservatory Theater on Geary Street was completely packed. I was overwhelmed and unable to get good photos, unfortunately, but formal photos were taken and should be available on the event’s web site. [Image: Ziggy looks down from a truck, with anti-Trump posters and an I.A.T.S.E. Local 16 banner.]

On Friday, the day of the inauguration, there were protests all day long throughout the country (and abroad). I chose to attend the A.N.S.W.E.R. Coalition rally at United Nations Plaza in the evening. Ziggy volunteered to run sound for it (his union, I.A.T.S.E. Local 16, supported the protests), and ended up being drafted into running sound for their morning action as well. [Image: A protester stands under an umbrella with “Not My President” and “Resist” written on it. ]

The weather was stormy, with intermittent sudden downpours. Some protesters got clever, with messaging written directly on their umbrellas. Having learned my lesson from being drenched at a previous A.N.S.W.E.R. rally, I wore rain pants in addition to my jacket this time. (Holding an umbrella isn’t practical while operating a professional camera!) [Image: A protester holds a sign reading “My melanin is not a threat.”] [Image: Speakers stand under an umbrella. One holds a sign in Spanish, calling for an end to the fascist Trump/Pence regime.]

As with that previous rally, I appreciated that the speakers and attendees (judging from the signage) emphasized that capitalism and white supremacy were the real problems to be overcome; this wasn’t just a pity party for Democrats or Hillary Clinton supporters. I was disappointed that there were not more black folks on the stage, however.

At the end of the rally, the emcee announced that they would be marching to the Castro and the Mission, but I headed on home. I wanted to save my energy for the Women’s March on Saturday. [Image: The crowd at the Women’s March fills the San Francisco Civic Center.]

When I arrived at the Women’s March half an hour before the 3 p.m. rally start time, the area in front of and to the sides of the stage at UN Plaza was already packed. I tried to take refuge under a tree to the side of the stage, but people kept climbing it for a better view, and I narrowly avoided being kicked in the head several times.

I eventually gave up on watching the speakers, and moved behind the stage to try to get some breathing room. In the over 13 years I’ve lived in San Francisco, I’ve never seen such crowds; not at Pride, not at a Giants victory parade. I read later that an estimated 100,000 people attended; over two million attended “sister marches” worldwide. Though I was stressing out from the crowds,  the energy was amazing. Ziggy, who ran a half-marathon that morning but still had plenty of energy, joined me a bit later. We took refuge for awhile at the nearby Opera House, where he works, and I took a few photos from the parapet. He convinced me to come back out for the march itself, as it was such an important and historic occasion. We made our way down Market Street to Justin Herman Plaza in a steady rain, thronged by thousands of people chanting and cheering. So what is next for the resistance? Marches and rallies are important to show solidarity, but I can’t help remembering what one speaker at a rally against police violence said: “This is not the work.” More radical action will be needed to actually dismantle white supremacy. I cannot support violence, but I don’t know what alternatives to suggest. I will be keeping my eyes and ears open for practical solutions.

My photos from this week’s events—The Ghostlight Project, The A.N.S.W.E.R. Coalition rally, and the Women’s March—are available on Flickr. Some are available on Wikimedia Commons as well. Please credit me as Pax Ahimsa Gethen if you use any of them, thanks.