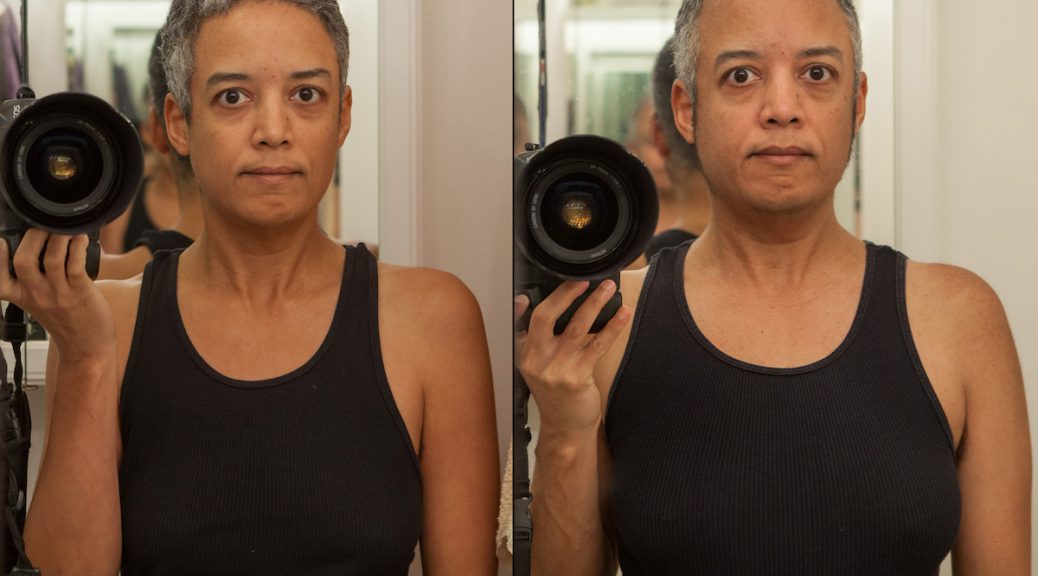 [Image: Side-by-side self-portraits of Pax, on 32 days vs 36 months on testosterone.]

Today marks three years to the day since I started on testosterone therapy. The comparison photo above uses my Day 32 photo because I had a very different pose and expression on Day 1. You can see a few more photos taken of me today on Flickr.

I wish I could say that I’m pleased overall with the visible changes, but I’m not particularly. I know that every body reacts to the hormone differently, but I expected that I would see more dramatic changes by now, and would not be misgendered very often. At least my voice has pretty much settled in the baritone range.

Regardless, I’m not regretting the decision to go on testosterone, because living in an estrogen-dominated body was even worse. When lab results showed that my hormone levels were way too high, I was afraid that reducing my dosage would cause my menstrual periods to resume. Fortunately, they have not, but I’m still investigating and considering other options, as I’m not happy with needing Ziggy’s help to do my biweekly injections.

Ultimately, I have to remind myself that being agender, I’m going to be misgendered by strangers (and unsympathetic acquaintances) no matter what I look like. I was thinking of this when I created a Wikipedia article about Tyler Ford yesterday.  Tyler, who I’ve written about before, is also agender, also of mixed black/white Jewish parentage, and also uses “singular they” pronouns. Unlike me, they chose to stop hormones, and prefer a more femme presentation. They’re also 20 years younger than I am, and seem to relate to people much better than I do. Of course, that doesn’t stop them from being justifiably angry when they are misgendered, which they are on a regular basis.

I can accept being referred to as a man, since male is my subconscious sex, and I chose to transition to male for legal and medical purposes. But I still simply cannot be a man, and being misgendered as a woman—whether accidentally or deliberately—causes me significant distress. Maybe one day most people will truly accept non-binary genders as being just as legitimate as binary ones, but that day seems so distant as to be a hopeless fantasy. On top of my depression and anxiety over violence against marginalized people and our fellow animals, these feelings continue to distance me from others.

There is some progress in legal recognition for non-binary people; a non-binary intersex person, who I wrote about previously, has now received an accurate birth certificate. But this still doesn’t help much out on the street, where people make immediate judgments about the gender of strangers based on superficial cues. And bullies and bigots empowered by the incoming presidential administration are only going to ramp up the mockery and harassment of anyone who doesn’t conform.

So I begin 2017 without much optimism, but with the knowledge and determination that my identity is legitimate, no matter what anyone else says. That might not be much to hang onto, but it’s all I’ve got.