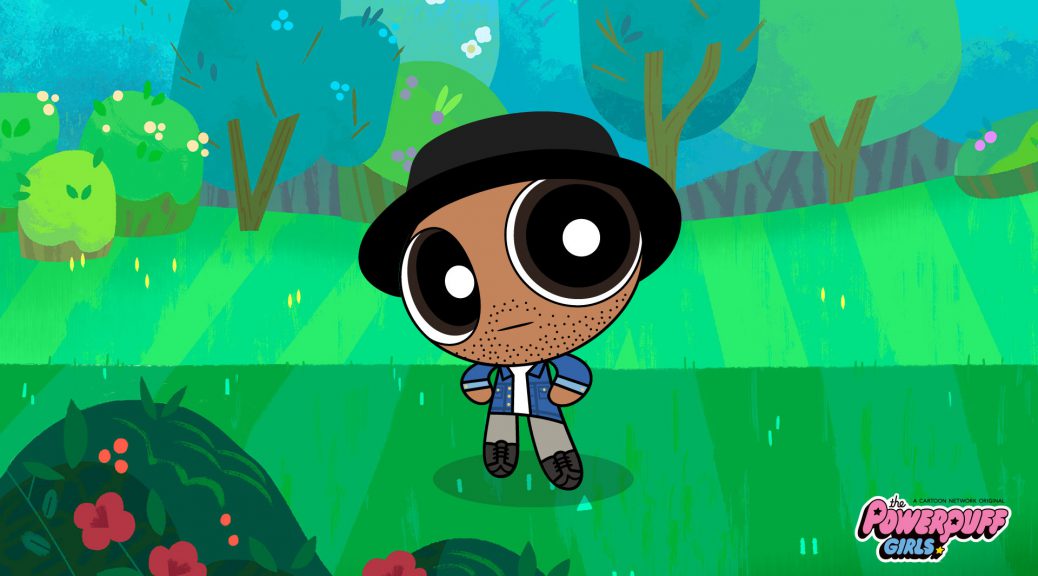 [Image: A “Powerpuff Girls” cartoon rendition of Pax, standing in a field with trees in the background.]

Recently I saw a number of Facebook friends posting avatars they created using the “Powerpuff Yourself” web site, a promotional tool for the reboot of the Powerpuff Girls series on Cartoon Network. I’d never watched the show, but figured it was a bit of harmless fun. I love creating avatars, and especially liked that this generator was gender-neutral; many require you to specify male or female first, and limit clothing and hairstyle choices accordingly.

So I was concerned when I read a link posted on Sophie Labelle’s Facebook page* that suggested that a new episode of the show was transphobic. The link contains a very detailed description of the episode, about a horse who wants to be a unicorn. Later reading confirmed that the story was intended to be about gender identity.

From the detailed write-up the episode sounded pretty awful, but as I hadn’t watched it myself I wanted to get the opinions of more trans people on it. I posted about it to Kat Blaque’s Facebook page,** as did at least one other reader. A day or two later, Kat posted that she’d watched the episode and understood the criticism, but didn’t personally feel that offended by it.

I tried to watch the episode online for myself, but after a two-minute preview the Cartoon Network required me to enter login credentials for a cable or satellite provider to watch the rest. This is a huge pet peeve of mine, as Ziggy and I haven’t had cable television in over 12 years—we haven’t even had a working antenna for the last two or three—and I won’t use torrent sites to download media illegally. Both of these issues could merit blog posts of their own, but suffice to say, I have not watched the episode in question as of this writing.

So this really should come as no shock, but we trans folks do disagree on some stuff. This bears repeating because sadly, to the majority of US-Americans, all trans people are Caitlyn Jenner. And Caitlyn Jenner is about as representative of trans folks as Ben Carson is of black folks. So if you’re cisgender, please keep this in mind.

The important thing is that, as with racism, sexism, and other oppressions, an assessment of whether or not something is offensive should be made by those affected by it. If a marginalized person is hurt by words or pictures, they should be taken seriously, and not just dismissed as being overly sensitive, “playing the victim,” being “politically correct,” or practicing “identity politics.” Pain is genuine even if those causing the pain didn’t intend it or can’t do anything about it.

People in positions of privilege can also be genuinely hurt, of course. But too often, such people use their pain to derail and drown out the voices of those who don’t have access to a wealth of resources and/or sympathetic people to cope with that pain. This is why sayings like “cis tears” are sometimes used in response to cis people who say they are hurt by trans people calling them transphobic. The same holds true for white people and racism, and for men and sexism.

Regarding trans people, there’s a saying that I first heard in relation to disability activists: “Nothing about us without us.” The comic Manic Pixie Nightmare Girls illustrated this in another reaction to the Powerpuff Girls episode that Sophie Labelle linked to from her page. (ETA: Another article about the episode contains an interview with Manic Pixie cartoonist Jessica Udischas.) I don’t know if the writers of the Powerpuff Girls have trans people on their staff or not. Even if they did, that not would by itself negate a charge of cissexism.

I remember when I first heard complaints about the Amazon series Transparent, which has a cis male lead playing a trans woman, I thought the show was OK because trans people were on the staff and in the cast. But reading and thinking more about it, I now agree with the criticisms that casting a cis man as a trans woman reinforces the “man in a dress” stereotype, and deprives trans actors of much-needed work. (I also stopped watching the second season of that show after the first episode, because I found it too depressing and triggering.)

So where does that leave us with regards to the Powerpuff Girls? I’m not calling for anyone to boycott the show or take down their Powerpuff avatars. (Mine are still on Flickr.) I just want to make people aware that there are trans people who feel the show is trans-antagonistic, and their concerns should be listened to.

* Author of the web comic Assigned Male and books on gender diversity, which I blogged about recently.

** Kat and Sophie were both featured in my post about International Women’s Day.