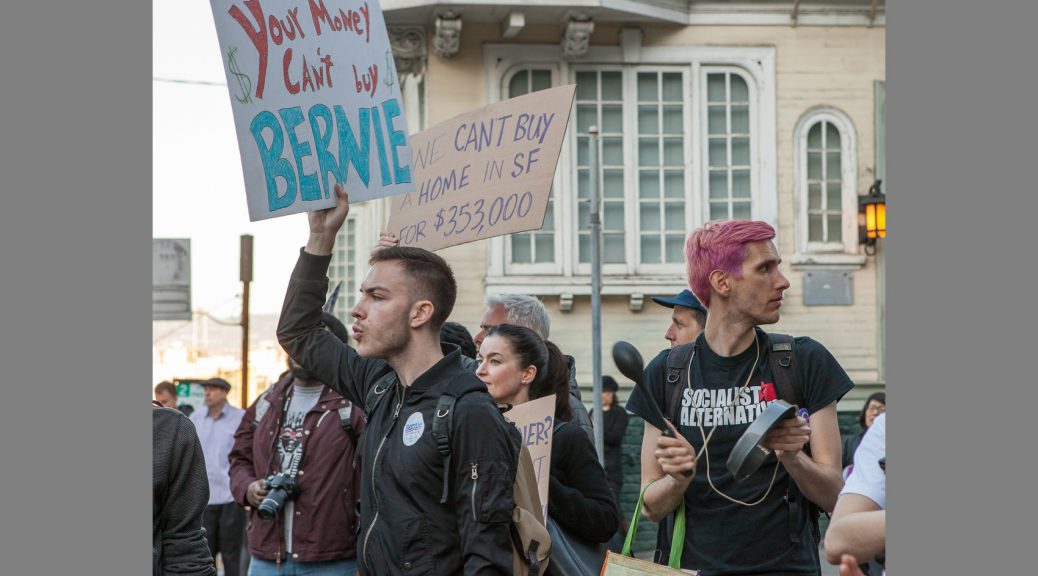 [Image: Protesters hold signs reading “Your money can’t buy Bernie” and “We can’t buy a home in SF for $353,000”. One protester wearing a “Socialist Alternative” T-shirt bangs on a pan with a spoon.]

Disclaimer/reminder: I am registered with no political party and support no presidential candidate at this time.

Last night I heard a commotion outside my window. Going out on the balcony to investigate, I saw police on motorcycles driving the wrong way down the one-way steep hill I’ve lived on for the last 13 years. Following behind was a group of several dozen marchers, holding signs, banging on pots and pans, and chanting. As it is somewhat unusual for a protest march to come through my neighborhood—Nob Hill, San Francisco—I quickly threw on some (more) clothes, grabbed my keys and camera and ran outside to take some photos. [Image: Protesters stand in the street. One holds a sign reading “Oligarchy is Unamerican.” Another reads “$HRC + $DNC = $uperDelegate$”.] I caught up with the group a block away, where I eventually learned that Hillary Clinton was in town hosting a fundraiser with George Clooney, at the home of a venture capitalist. Price for a couple to sit at the head table: $353,000. As the sign pictured at the top of this post notes, you can’t even buy a home in San Francisco for that, and not just on Nob Hill. Median home prices here are in the seven figures. Ziggy and I live in a rent-controlled apartment, which is a privilege in a city that has been rapidly gentrifying.

Police barricaded the street, but stood by passively; I did not witness or read about any confrontations. I can’t help wondering if the same would have been true if there had been more black and brown faces in the group of protesters. [Image: A protester speaks into a megaphone. Another protester wears a shirt reading “Socialist Alternative.”]

While trying to determine who organized this protest, I noticed that a number of people were wearing T-shirts reading “Socialist Alternative.” I looked them up, and found that they have a “Movement4Bernie” campaign to support Bernie Sanders. (I also located the Facebook page for the event. Far fewer people showed up than indicated by the RSVP numbers.) I was genuinely surprised that a socialist group would openly support a Democratic presidential candidate. I know that Bernie has been described as a democratic socialist, but as far as I’m concerned, socialism cannot happen under our two-party system. We need a (peaceful) revolution to create a society that truly treats all people (human and non-human) with fairness and equity. [Image: A dog with their tongue hanging out stands next to a human wearing boots.] [Image: A leashed dog wearing a T-shirt sniffs the rear of another dog.]

I had short, reasonably pleasant conversation with one of the protesters, who was wearing a Bernie shirt. He didn’t openly identify as socialist, but was sympathetic to my view that the two-party system was an intractable problem. He pointed out that Bernie had been an independent; I countered that he had moved to the Democrats, and was now part of that machine. Would he not endorse Hillary if she won the nomination? The protester said he was going to make sure she didn’t win, but when I pressed him on whether Bernie would endorse Hillary, he mentioned “lesser of two evils.” (ETA: A recent SocialistWorker.org editorial echoes some of my concerns.)

I don’t want to get into a debate about lesser evils, third party “spoilers,” or Hillary vs Bernie; I’ve heard it all before. But I am particularly interested in hearing from socialists, whether or not you support Bernie Sanders. Others are welcome to comment as well, but please respect that I am an independent and intend to stay that way.

My full set of photos from the protest is on Flickr. Please credit me as Pax Ahimsa Gethen if you use any of them, thanks!

4 thoughts on “Socialists for Bernie?”