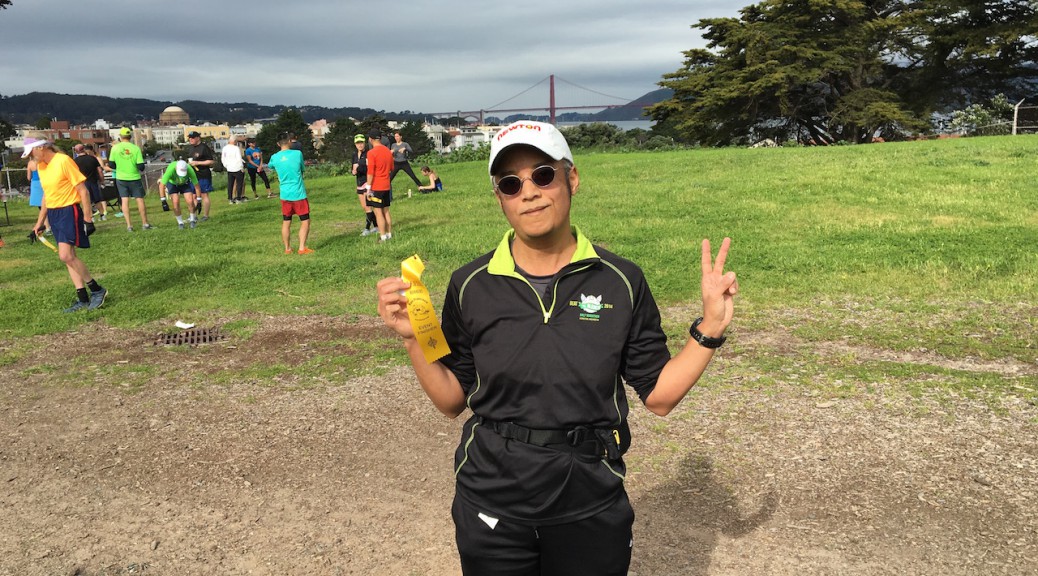 [Image: Pax stands in a park with a finishing ribbon and their fingers in a “V” sign. Several people in colorful running clothes and the Golden Gate Bridge are in the background. Photo by Ziggy.]

Happy Vernal Equinox! Today, when the hours of light overtake the hours of darkness, is my personal New Year. Normally I like to take a few minutes starting at the exact moment of the equinox to bear witness to the change of season, but this year’s came unusually early (March 19 at 9:30 p.m. PDT) and I missed it. I used to try to have a short observance of each of the quarters, a holdover from my brief exploration of neopaganism, but in recent years I’m satisfied if I can just remember the Spring time.

I celebrated by running a 10K race with my running club, which I was very much inclined to skip, as I’ve done very little running this year, and none at all in the past two weeks. But Ziggy (who can’t run for a few weeks due to injury) cajoled me with the promise of pancakes served with the huckleberry syrup he brought back from his recent trip to Montana. (I usually prefer oatmeal – I’ve really been getting into steel-cut oats made on the porridge setting of our new rice cooker – but if someone else does the cooking and cleanup, I’m not normally going to refuse a pancake brunch.)

I’m really frustrated with my continued inability to do something that is not only good for me, but (usually) feels good while I’m doing it. Dysphoria plays a significant part, as I’ve mentioned frequently, especially at races like this where I’m very likely to be misgendered at the registration table. But today, fortunately, I was handed the correct (“male”) race tag. I didn’t talk with anyone else at the event (other than Ziggy, who arrived shortly after I finished and snapped the photo at the top of this post), so I managed to get through the race and home again without being triggered.

I’m aware that depression is also a major part of my inability to maintain a regular exercise schedule, or in fact leave the apartment on a regular basis at all at this point. Despite my holistically-oriented doctor and (now-former) therapist both recommending drugs or other medical interventions, I’m still not willing to go that route again. I’m dismayed enough to be dependent on this country’s health care system for my testosterone injections, which I’ll (likely) need for the rest of my life; I don’t want to add another prescription to that if I can possibly avoid it, especially since the last psychiatric drug I tried face-planted me on the sidewalk with a tonic-clonic (“grand mal”) seizure.

Part of coping with depression and dysphoria requires separating the things I can control from those I can’t. Therapy was helping with this somewhat, but ultimately – after a period of years, not weeks or months – my therapist felt he really couldn’t help me any further with talk sessions alone. I respected this, but felt frustrated that I could not adequately convey the impact of the cissexism, racism, and other oppression in the world that has made me feel more and more vulnerable and helpless the more I become aware of it. I don’t want to just take a drug that will lull me into complacency.

I spent many years being complacent, largely due to ignorance; now that I’ve seen more of the world for what it is, I don’t feel I can ever go back to that state. My activism might be limited mostly to blogging right now, but at least it’s something. Speaking at the Intersectional Justice Conference this coming weekend will also be worthwhile. I just wish I had a way to spread my messages more effectively without compromising my values or mental health.

As I prepared to head out to the race this morning, Ziggy said he was proud of me. I said, “Don’t be.” I meant that because I don’t consider running 6.2 miles at a non-competitive pace to be an accomplishment for someone at my fitness level. But I should have accepted the compliment, because what was significant was not that I was running a race of this distance – regardless of my finishing time – but that I was leaving the apartment voluntarily, for an event I didn’t have to sign up for in advance, and where no one would be there waiting for me. I’ve made very, very few commitments lately because I don’t like letting people down, but I seem to have no problem letting myself down, over and over again.

I know I’m capable of doing more, or should be. Yesterday I watched a movie that I’d had in my Netflix queue for some time, The Diving Bell and the Butterfly, based on the book of the same name by a man with locked-in syndrome who communicated solely by blinking his left eyelid. Through my growing awareness of ableism I know that disabled people resent being “inspiration porn,” so I’m not going to say that this movie gave me renewed faith in the indomitable human spirit and that I have no excuse not to live life to its fullest and yadda yadda yadda. But it did make me feel grateful that I (currently) have the full use of my limbs, even if my brain makes it difficult for me to get motivated enough to get out of my chair.

Will I be able to renew myself this year? I can’t see going on like this. I’m only 46 years old, but I feel each day like I just want to hurry up and get my life over with. That’s no way to live.