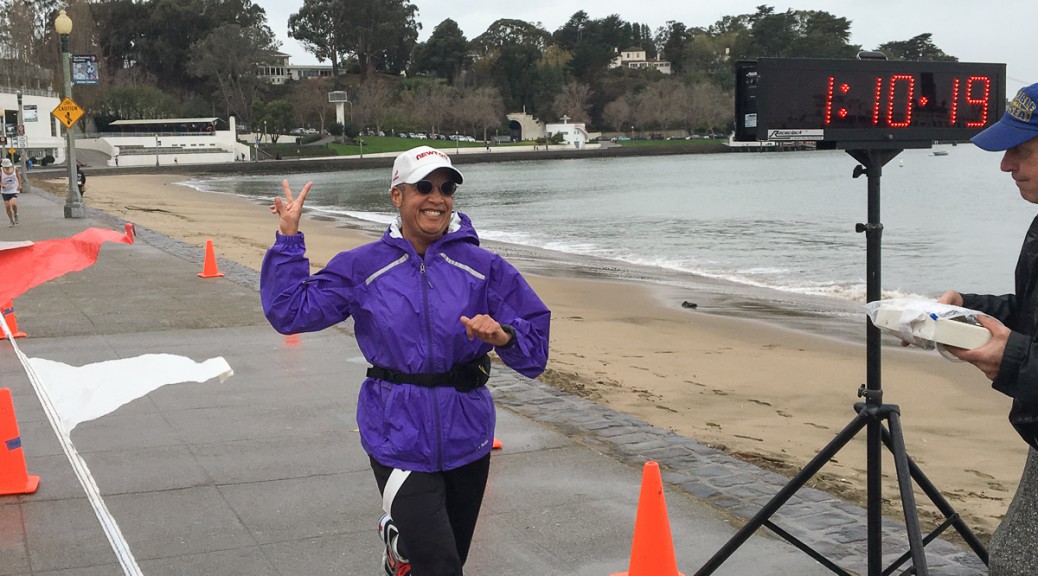 [Image: Pax, smiling and making a “V” sign with their fingers, approaches the finish line of a race on a rainy day at the San Francisco waterfront. Photo by Ziggy]

After spending much of the last two months sitting in front of the computer or TV in my apartment, I knew that I needed to move my body for the sake of my well-being. Several months ago my doctor actually wrote me a prescription, with my encouragement, to run at least twice a week, as running is the one activity that has consistently improved my physical and mental health. But I simply haven’t had the motivation to go outside and face the world.

I decided that signing up for a race would be a good incentive to run. I had my eye on the Kaiser Permanente Half Marathon that I’d run twice previously. This race features a flat, scenic course, and was normally held around the time of my birthday in early February. Due to the Super Bowl, this coming year it would be held a bit later, on Valentine’s Day. This would give me enough time to train up to the 13.1 mile distance.

Before committing to that race, however, I decided to run a 10K (6.2 miles) with the DSE Runners club, as the course was familiar to me and the starting line was only a mile from home. I didn’t get much sleep the night before, thanks to a rare night of socializing in honor of my partner Ziggy’s birthday, but I still managed to head out the door in plenty of time to sign up for the Sunday morning event.

And here came the awkward bit I’ve faced ever since beginning my transition. As with virtually all athletic events, competitors in DSE club races are separated into male and female. I actually have no problem identifying as male for this purpose, especially at this point in my transition; I’ve been on testosterone for nearly two years. It’s the assumptions that male is equivalent to “being a man” that I have an issue with.

Regardless, I’m still not consistently read as male, and yesterday was no exception. As I approached the registration desk, the volunteer had a white tag – indicating a male runner – in hand. But as I began signing the waiver and getting my cash for the race out, he switched to an orange tag – indicating a female runner. I said, in as even a tone as possible, “No, white tag.” He put the orange one down and handed me a white one. I thanked him, grabbed a safety pin to attach the tag to my clothing, and headed off to get ready for the race.

As misgenderings go, this went about as smoothly as I could hope for. No awkward, stammering apologies, just a swift correction. Wouldn’t it be great, I mused, if we could handle gender this way, with a colored tag that each person requests to identify themselves. No assumptions, no guessing, just a strip of paper that immediately shows the world who you are. [Image: Pax, early in transition, stands at the waterfront holding a green tag. Photo by Ziggy.]

Of course, male and female are not the only genders. My club does have a green tag for those who choose the “self-timer” option. I tried opting for this early in my transition so that I could run without specifying a gender, but found out that I could not cross the finish line or get an official finishing time that way. As the adrenaline rush from accelerating toward the finish line is the highlight of racing for me, I decided to stick with the white, “male” tag for future club races.

Despite getting the proper tag with minimal fuss, I couldn’t help but take an assessment of my presentation, as I do whenever I’m misgendered. I know it’s not my fault if I’m read incorrectly, but I’m curious what visual cues I’ve given off that cause people to assume I’m female. As seen in the photo at the top of this post, I was wearing an oversized purplish-blue rain jacket, white cap, long black pants, and a fanny pack. While not obvious in the photo, I hadn’t shaved that morning, so had a bit of stubble. My sideburns also came down below my ears.

Surveying the other runners, most of the men were wearing shorts, and most of the women were wearing leggings. (It was about 45 degrees and overcast outside at the start, for the record, with rain on the way.) Almost no one else was wearing a fanny pack, but I like to carry water with me even for a short race, and I don’t have a car to stash my keys and cell phone. (Some runners leave these in boxes at the registration desk, but I’m not that trusting.)

In any case, I crossed the finish line with my slowest time in three years for this race distance, thanks to my months of inactivity, but at least I finished the race. (I set a PR on this course exactly one year ago, so my fitness has taken a nosedive since then.) I’ve signed up for the half-marathon, and look forward to running it with Ziggy as a Valentine’s Day date. [Image: Ziggy and Pax pose with their finishing medals at the 2015 Kaiser Permanente Half Marathon in San Francisco.]