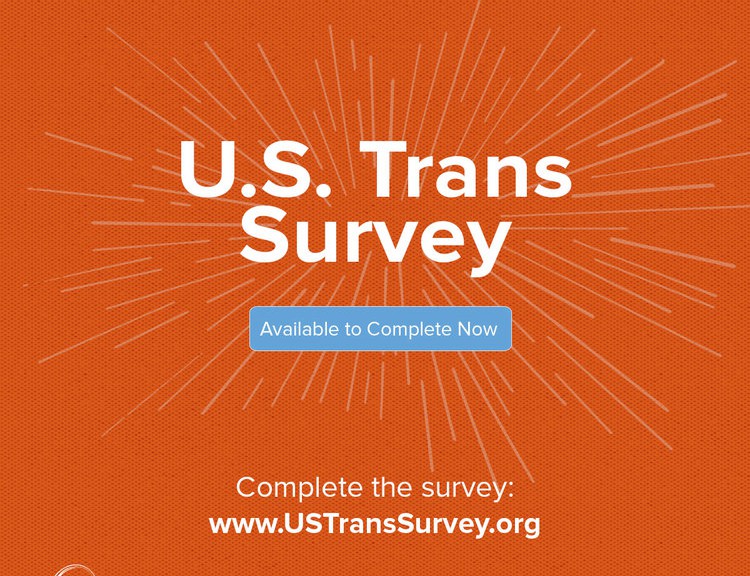 [Image: Orange banner with “U.S. Trans Survey” in white letters, and “Available to Complete Now” in a blue box.]

This morning I completed the U.S. Trans Survey, from the National Center for Transgender Equality. This survey for trans and nonbinary people living in the U.S. had an impressive amount of detail. As today is the first day the survey is available, server response time is slow; I recommend giving yourself plenty of time to complete it. Also be aware that many of the questions are potentially triggering.

Near the end of the survey, one of the questions presented a list of issues of concern to trans people, including violence, health care, homelessness, identification documents, and so forth. The question asked to assign importance (Very/Somewhat/Not) to each of these, and then to rank the three most important from the list. As my top priorities, I chose violence, police violence, and school bullying and discrimination.

While I have been fortunate not to experience any trans-specific physical violence or overt bullying myself – yet – these issues are critical to address. Trans women of color are particularly targeted for violence. Seventeen trans women – that we know about – have been murdered in 2015, and fifteen of them were women of color. Trans actress and activist Laverne Cox has described this as a “state of emergency.” Even the mainstream Time Magazine has taken notice.

As noted by those quoted in the Time article, increased visibility of trans people has not halted the continuing problems that disproportionately affect us, including poverty, bullying, unemployment, and violence. Most of the general public still doesn’t understand trans and nonbinary people, and that ignorance can lead to overt acts of hate and fear, as well as more subtle discrimination that still has devastating and lasting effects.

Education led by trans and nonbinary people – telling our own stories – is part of what will help dispel the ignorance. That’s a large part of why I started this blog, and why I urge people to stop focusing on our body parts when talking about gender identity. Performing cisnormativity – “passing” as a cis person – should not be the determiner of acceptance for a trans person. Whether a person has a beard or breasts, whether they wear a skirt or pants, their gender identity should be accepted without question.

We cannot continue to allow cis people to define who we are, what we can have access to, and what rights we are allowed to have. Cis allies can help by honoring our names and pronouns, sharing our stories, and speaking out against cissexist language, wherever it occurs.

We must put a stop to this epidemic of violence against trans people, women in particular. Visibility is not enough.

4 thoughts on “Visibility and violence”