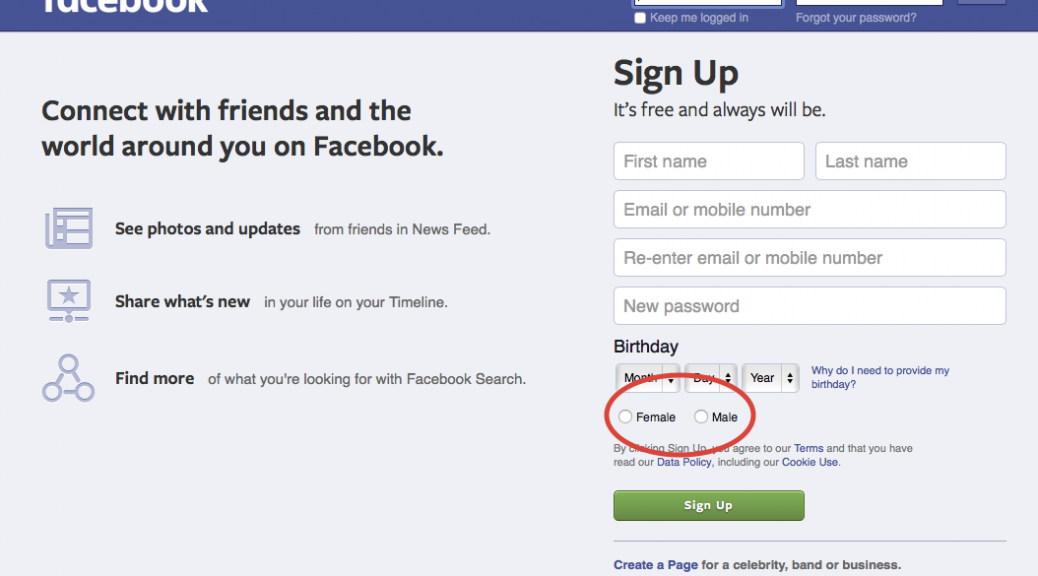 [Image: The signup page for Facebook. The words Female and Male are circled in red.]

Yesterday I read a great response from agender writer Tyler Ford to the question “Do I Have A Penis Or A Vagina?” (Spoiler: You should never ask this question of anyone.) When I went to leave a comment, MTV.com offered me the option to link to my Facebook or Twitter account, or create an account on the site. I chose the latter, and then was presented with a signup form that asked me to specify my gender: Female or Male. Highly ironic considering the author of the article is neither female nor male.

In the course of my gender transition I’ve become increasingly aware of nonbinary erasure. Some sites, like Google, have added nonbinary options, though they are usually hidden under a “More” option, or allow gender to remain unspecified. Facebook added custom gender options years ago, but in order to sign up for a new account, you still need to specify Female or Male first (as seen in the screenshot at the top of this post). Yahoo requires Male or Female to be specified at account creation as well. [Image: The signup page for Yahoo. The words Male and Female are circled in red.]

My assumption is that this forced binary gendering is for the benefit of advertisers, whose systems probably aren’t set up to handle anything other than two genders. Considering the backlash at the idea of degendering children’s products, it seems US-Americans still believe that men and women have fundamentally different needs when it comes to shopping. And as for people who aren’t men or women, well, I guess we don’t exist.

I’ve started sending messages to customer support when I see only Male and Female options presented on a form. I’ve had mixed results thus far. Two years ago I signed up for an account with Rovio so that I could save my Angry Birds scores online. I sent this message:

Why do I need to specify my gender in order to register? My gender has nothing to do with my gameplay. And the two options given, “Male” and “Female”, are actually sexes, not genders.

We are very sorry to hear that you are upset about our registration form. The inquiry includes gender due to marketing reasons and to ease the targeting of certain campaigns, games etc. We apologize for the inconvenience caused for you and we hope that you can still enjoy the games!

I had better luck with Wikimedia, when I contacted them after responding to a survey last year:

Hello, I just made my annual donation to Wikipedia after receiving the fundraising e-mail from Jimmy Wales, and I took the survey afterwards. On the last page I was asked to specify my gender, and the two options presented were Female and Male. Please note that Female and Male are sexes, not genders, and not everyone identifies as one of these. Please consider adding options of “Other” (with or without a fill-in box) and “Decline to State” to this question on your survey in the future.

Thank you for your email and your support for the Wikimedia Foundation and free knowledge. Thank you also for your suggestion about the extra options for the survey. It’s a good one, and we will add it to the existing list of proposed improvements. We may have higher priorities to implement in the immediate term, but appreciate your input in making the donation process the best it can be.

I’m going to keep sending short messages like this, though I’ll probably drop the bit about male and female being sexes rather than genders, as I don’t want to confuse people too much in this setting; I just want them to be aware that nonbinary people exist. I’ll also consider not signing up for sites and services that require a binary gender to be specified. I declined to sign up for MTV.com, for example, though I did send a message to customer support first.

Another nonbinary person who has been far more active in this area is Cassian, aka on mxactivist on Tumblr. Amongst other things, they’re working to get the title Mx included on every form in the UK. That gender-neutral title is already gaining official recognition there. I’m not terribly fond of it myself, but I do hope it catches on in the US, so nonbinary people can specify a title other than Mr, Ms, Miss, or Mrs. (Justin Vivian Bond is one notable nonbinary person in the USA who goes by Mx.)

Even if you’re not nonbinary, you can help stop nonbinary erasure by sending quick e-mails to customer support like the above. And speak out whenever you hear others say that people like me don’t exist, are freaks, are “special snowflakes,” or are mentally ill (though some of us are, just as some binary people are, and there’s no shame in that). As a member of the LGBT studies task force on Wikipedia, I am constantly seeing vandalism of the Genderqueer page and others like it; vandals edit the page to say that we are all autistic teenagers on Tumblr with make-believe identities. Yes, these are trolls and their vandalism is soon reverted, but being confronted with this sentiment day after day wears a person down.

Nonbinary people are not “really” biologically male or female. What we really are is exactly what we say we are, whether that’s agender, bigender, genderqueer, genderfluid, or something else entirely. (See Genderqueer Identities for a partial list.) Nonbinary genders are not new and are not going away. It’s time that society stops erasing us and starts respecting us.