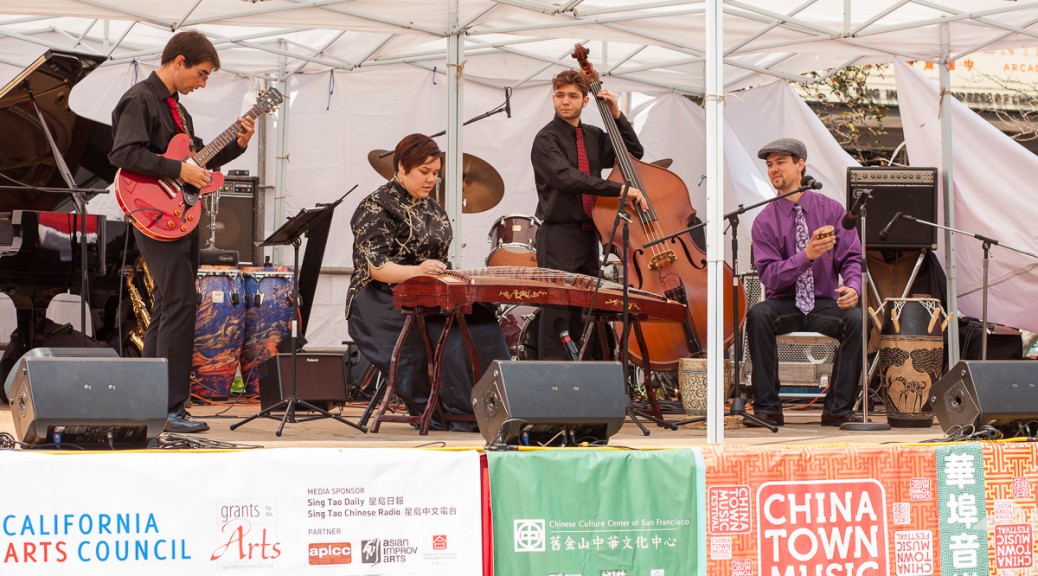 [Image: A four-piece band plays on an outdoor stage. Instruments include an electric guitar, a guzheng, and an upright bass.]

Today I headed back to Chinatown to take photos at another outdoor festival, the sixth annual Chinatown Music Festival. [Image: A young person plays a guzheng on an outdoor stage.]

The first several performers were from the San Francisco Guzheng Music Society. The guzheng is a Chinese zither (I learned today from Wikpedia). [Image: Three musicians perform on an outdoor stage. Instruments include a guzheng and an upright bass.] [Image: A singer plays a hand drum while singing into a microphone on an outdoor stage. An upright bass player plays in the background.]

The next group, the Creative World Music Ensemble, also featured a guzheng. I was excited seeing this band set up when I arrived, as I hoped the upright bass meant they might play some jazz. They did not disappoint. The white percussionist also got great applause, as well as praise from the MC, for singing in Chinese. [Image: A four-piece band performs on an outdoor stage. A banner in front of the stage reads “Chinatown Music Festival.”] [Image: A guitarist sings into a microphone on an outdoor stage. An electric bass player plays in the background.]

The final set I attended for this festival was Yea-Ming and the Rumours. (Performances continued for the remainder of the afternoon.)

Glad I ventured out, even on a hot sunny day at noontime, to enjoy free music in a great city. I’ve uploaded the full set of photos to Flickr. If you like my photography, please consider supporting me on Patreon or leaving me a tip so I can continue to do shoots like this.