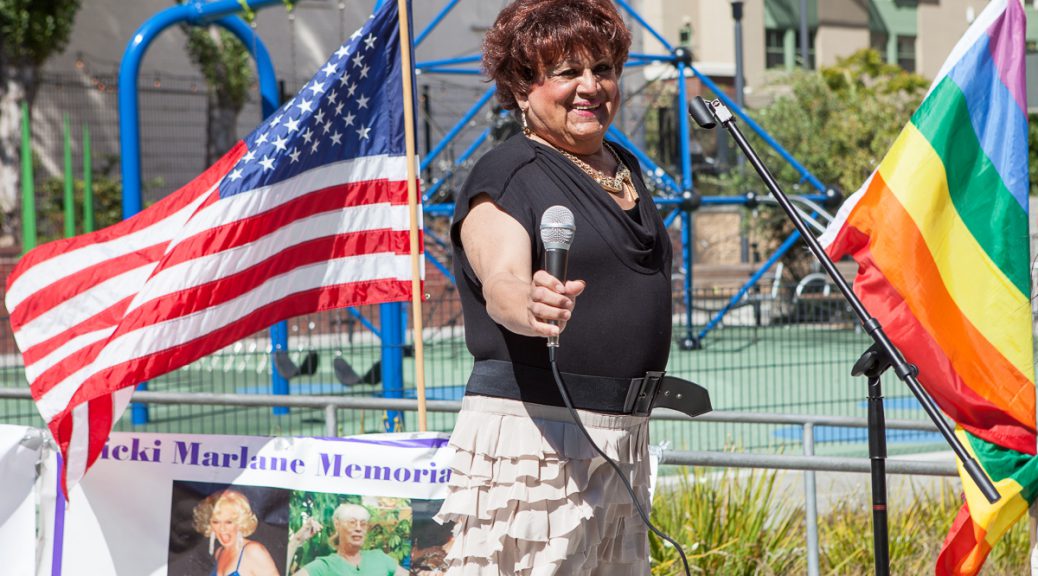 [Image: Dolores “Dee Dee” Yubeta, a regular at Gene Compton’s Cafeteria, smiles while holding a mic on an outdoor stage. Rainbow pride and American flags fly behind her.]

Yesterday I headed to the Tenderloin in San Francisco to attend a celebration of the 50th anniversary of the Compton’s Cafeteria Riot, an uprising against police harassment that predated the Stonewall Riots by three years. This event was created by Felicia “Flames” Elizondo, a trans Latina activist who frequented Compton’s and was present at the riot; she also gave yesterday’s keynote address. I recognized her and several of the other organizers and speakers from other trans-focused events I’d attended in the past year, including the Transgender Day of Remembrance, Transgender Day of Visibility, Tranform California, and the Trans March. [Image: Felicia “Flames” Elizondo speaks into a mic on an outdoor stage. A rainbow flag is in the background.] [Image: Lyle J. Beckman of the San Francisco Night Ministry speaks into a mic on an outdoor stage. A Spanish translator provides interpretation.]

While this event was focused primarily on our elders in the trans liberation movement—trans women of color in particular—a variety of speakers and performers were included. Dani Castro and Akira Jackson served as emcees. The event opened with Lyle J. Beckman of the San Francisco Night Ministry. Ronnie Lynn, a popular female impersonator in the 1960s and a close friend of Felicia’s, also spoke. [Image: Singers of the Street perform on an outdoor stage, with Jasmine Gee on clarinet.] [Image: Felicia “Flames” Elizondo smiles while holding a cake with a “Screaming Queens” logo and picture.] This community event was mercifully free of political speeches. Politicians were represented only in the form of a resolution honoring the event from state senator Mark Leno, a brief appearance by mayoral advisor Theresa Sparks, and commendations given to trans elders from the board of supervisors.

My full set of photos is available on Flickr. Please credit me as Pax Ahimsa Gethen if you use any of them, thanks!

One thought on “Honoring our trans elders from Compton’s”