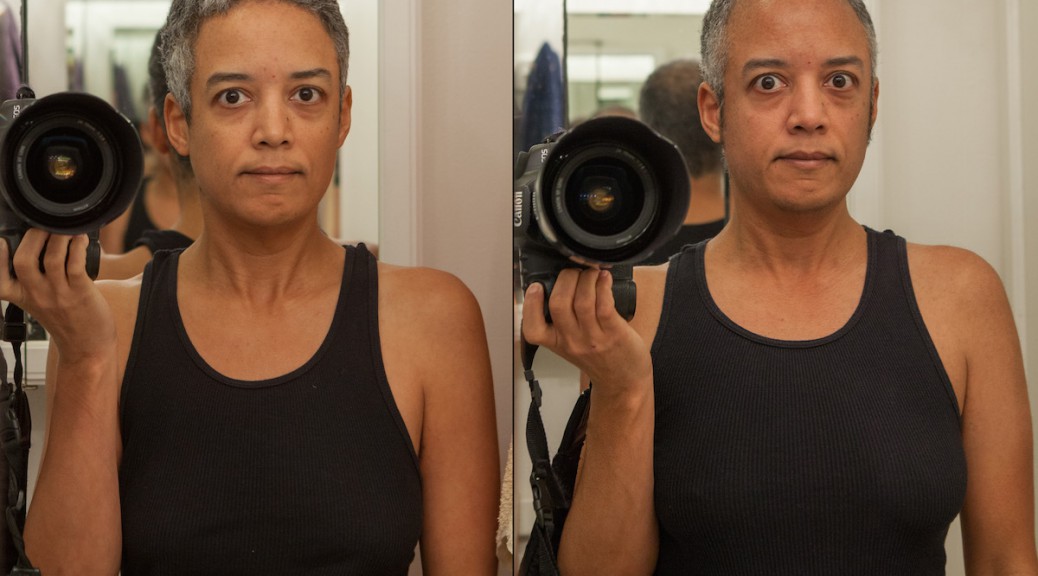 [Image: Side by side self-portraits of Pax, at one and 24 months on testosterone.]

Today marks two full years since I began my physical transition with testosterone therapy. Looking at the above photo, contrasting how I looked after one month on T with how I look today, I can definitely see some changes. (My receding hairline might not be evident if you’re viewing this on my blog; here’s the full photo on Flickr.) But the pace of change has been frustrating, as I still haven’t been able to grow a full beard, and am still getting misgendered on a regular basis.

The most recent misgendering was this morning, when I went to compete in a 5K race. I was dressed nearly the same way as in last month’s race, and as with that event, was again misread as female. The mistake was just as quickly corrected as it was last time, but it still stung, especially considering this milestone date.

I’m well aware that there are ways that I can present myself to increase the odds of being read as male. But to craft an artificially hypermasculine appearance would not be living as my authentic self, which was the whole point of this transition. I’m not aiming for the middle of some (nonexistent, in my opinion) spectrum between “M” and “F.” Nor am I seeking  to embody a stereotypical “androgyny”, which to most modern US-Americans means thin, hairless, and usually white. I’m simply dressing in a way I feel comfortable, and accepting whatever changes come with my (second) puberty, just as a typical cisgender male would.

I do have more control over my hormone levels than a typical cis man would, however, and I plan to talk with my doctor about that this week. Increasing my dosage might end up making the hair on my back and shoulders grow faster than the hair on my face and chest (as has already been happening to some extent), but I knew that was a possibility well before I started on T. I don’t mind if the hair on my scalp recedes or thins out more quickly, either; if anything, I welcome baldness as an additional signifier of maleness. I usually wear hats when I’m out in public, however, so my disappearing hair might not be apparent enough to get me gendered correctly.

I hate that I feel I need to grow a beard to be read as male – as beards should not be linked with maleness in the first place – but since I don’t mind having facial hair, it seems like my best option. Since I can never realistically expect strangers to recognize that I’m agender, having my transitioned sex read correctly is the most I can hope for.