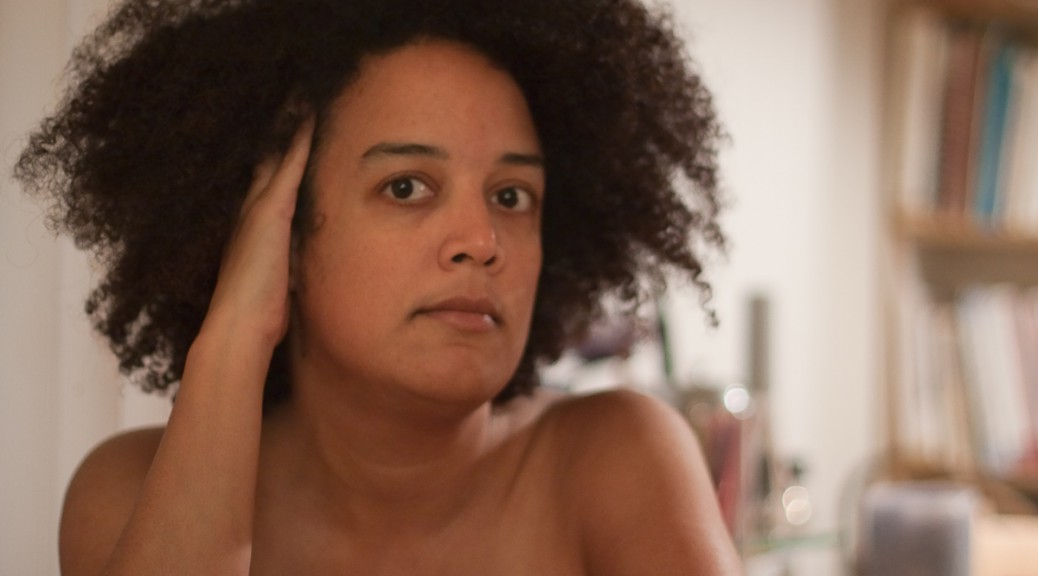 As anyone reading this blog can probably see, I’m a big fan of Everyday Feminism. I read most of their articles and share many of them. But when I saw an article this week on white people with dreadlocks, I avoided reading it, until a fellow black animal liberationist asked what I thought of it. I read it and thought the author did an excellent job of explaining all of the problematic things about white people wearing this hairstyle, and addressing all of the common retorts that black folks have been putting up with for years. I have basically nothing add to her arguments.

But one of the reasons I avoided reading this article is that hair has been a sore topic – literally – for most of my life. White folks with straight or loose curly hair just can’t relate to what black folks, women in particular, go through to meet society’s standards (aka performing whiteness).  I’m mixed (black/white) and have what many consider to be “good hair,” a term which is all kinds of problematic itself. Yet I too suffered through the burning hot combs, the painful detangling, the damaging relaxers (“creamy crack”), tedious roller sets, and all kinds of stress related to the dead cells on top of my head, growing up as a black girl (pre-transition) in the USA. [Image: Pax at age 10, in pigtails with baby goats in their lap.]

When I was a baby, it took awhile for my hair to appear; strangers often thought I was a boy. (Foreshadowing?) But when it finally came in, it grew with abundance. My mother usually styled it in braids. When she decided to style me with lots of little braids, they took hours to put in. My (white) father would joke and complain about my screaming and crying from the pain of having my hair done. [Image: Pax posing for a class picture in a green jumpsuit, with lots of braids.]

Did I mention that I was the only black and only Jewish student in my elementary school in a WASP West Virginia town? I remember being sad that I couldn’t just take out a comb and run it through my hair like I saw the other girls doing. I insisted on going to school without braids one day, combing my hair throughout the day, and a frizzy nightmare ensued. When I got home, I headed directly to the closet and closed the door behind me, frustrated and humiliated.

At age 12 we moved from West Virginia back to Pittsburgh (where I was born), and I went from a majority-white school with 180 students to a majority-black school with over 1600. I was teased relentlessly by my fellow black students. I didn’t look right, didn’t talk right, didn’t listen to the right kind of music.

But I was told by these students that I had “good hair” and should take care of it better. I was also told this by an adult black man working the cash register at a record store where I went to buy an album as a teenager. I just stared at him in silence. By high school my mother (still taking charge of my hair) started putting relaxers in my hair, and taught me to put it in foam rollers. This was a tedious process, but if I didn’t do it every night I felt my hair did not look presentable. I only washed my hair once a week because it looked better after not being washed for a couple of days. But this meant more dandruff and itchy scalp. My white friends didn’t understand how or why I could go a whole week without washing my hair.

I was not sexually active until midway through college, and then only sporadically, so I didn’t think about the implications of having someone sleep next to me while I had my hair up in rollers. Not until later in adulthood, when a (white) man asked me how I expected him to get hard when I had curlers in my hair.

By senior year of college, I’d had enough of the relaxers and rollers. I accidentally discovered that if I let my hair air-dry, it sprung into natural curls. But it was difficult for me to manage long curly hair. So I had it cut short, and kept it short and curly for about twelve years. [Image: Pax with their spouse Ziggy on their honeymoon. Pax has short curly black hair and is wearing a black bathing suit.]

During these years I gained a lot of weight, and felt bad about it. I was also starting to go gray, prematurely, or so I thought (not realizing how common it is for people in their 30s to get gray hair). I decided to grow my hair out again, and start going to a higher-end salon for color and highlights, as I had a decent income at that time. I read about the Curly Girl method, and finally learned how to care for my locks properly. [Image: Pax looks over their shoulder. Their hair is curly dark brown with light brown highlights. Photo by davidhanddotnet] While I now got lots of compliments on my hair, it still took a lot of work. If I didn’t put any product in it, it looked like the photo at the top of this post. I had to use a lot of gel, and still never left the house without a scrunchy in my pocket. I considered myself lucky if I could get through an entire day without pulling my hair back into a ponytail.

During this time (my mid-30s), I took a band workshop where we were doing an R&B set, and I was the only black student. We were working on Stevie Wonder’s classic song, I Wish. One of the lyrics refers to him being a “nappy-headed boy.” I joked to the other singer, a white woman, that we’d have to change the lyrics. She laughed and agreed, saying that while I was nappy-headed I was never a boy. I pointed out that my hair was curly, not nappy. I was hurt as I had worked really hard to make it presentable. (The bit about never being a boy is ironic in retrospect.) [Image: Pax poses holding a camera with “funcrunchphoto.com” on the strap. They are wearing curly black hair and glasses. Photo by Ziggy.]

By my early 40s, I’d lost weight and felt better about my body. I decided I didn’t want to spend any more time and money on coloring and styling my hair. At age 42, I went into the salon and got “The Big Chop.” I soon realized that paying salon prices for this kind of haircut was ridiculous, so I found a barbershop. I showed the barber a photo of Samira Wiley from Orange is the New Black and said “make me look like this.” [Image: Pax with a buzzcut.]

A few months later, I bought a hair clipper set from a drugstore for the same price as I was paying for a single haircut at the barbershop. I now cut my own hair each month. I usually keep it slightly longer than the above (#2 blade guard). I’m growing out my sideburns, and impatiently waiting for my beard to fill in.

My hairline is also now receding, which is actually a welcome development. After decades of hair struggles, I’ll be happy to go bald and forget about my hair entirely. But shaving my head now would be more work than just cutting every few weeks.

The irony is that I love long hair on men.* It’s practically a fetish. But the amount of work it takes is just not worth it for my own head. I’ll just enjoy long hair on other people, vicariously.

This post was very emotional for me to write. Every photo above was taken before I began my gender transition (the last one, from August 2013, was just a week before I announced my new name). Many trans people do not like to look at their pre-transition photos, and for some such photos can threaten their safety or livelihood. I don’t think I can ever completely eliminate all traces of my past and go stealth, even if I wanted to, considering the volume of photos and writing I’ve posted online.

I hope this post will give white people some insight of why it’s a privilege to have hair that is considered socially acceptable without going to great lengths (pun intended) to keep it so. If you read all this, and the Everyday Feminism article on dreadlocks and links from that page, and still want to talk about Vikings or personal freedom or reverse racism, just do me a favor and keep your comments off of my space.

* To be precise, my primary attraction is to people with conventionally-male-appearing bodies and a slightly masculine or androgynous presentation. I myself am male, but not a man.

15 thoughts on “My black hairstory”