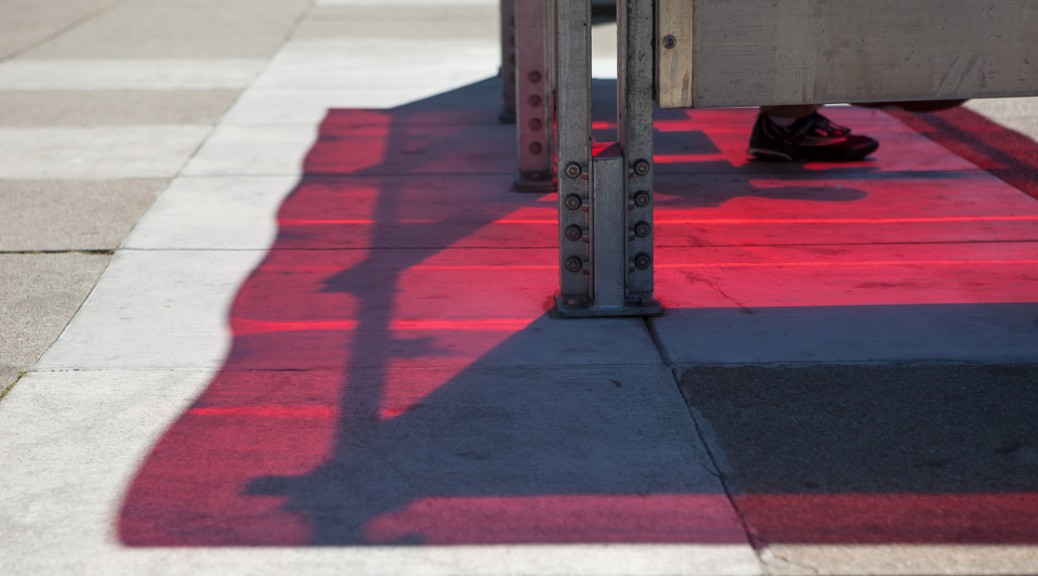 [Image: Ground-level side view of a bus shelter casting a red reflection on the sidewalk.]

I’m having a lot of trouble coping this week, as the weight of oppression and violence in the world is really dragging me down. Living with the knowledge that having brown skin in the USA puts a target on your back, independent of any other factors, is a sobering reality for a biracial person who was raised with respectability politics.

The mainstream media upholds white supremacy to the extent that black folks are called “racist” and “pulling the race card” for even addressing these subjects. Black academics like A. Breeze Harper of Sistah Vegan Project worry that they’ll get killed in a sundown town while traveling to promote their work.

Meanwhile ten trans women of color have been killed in 2015. I don’t want to say “so far in 2015,” but it seems inevitable that there will be more.  I shared the news of the latest, India Clarke, on my Facebook wall two days ago. Only person has “liked” or commented on that post thus far.

The black victim of white supremacy who is, understandably, getting the most attention from my Facebook friends right now is Sandra Bland. Found dead in her cell after being arrested at a routine traffic stop, her story raised all kinds of alarm bells when the police claimed she died by suicide.

I have no trouble believing that the suicide story is a cover-up, but I want to share another perspective that highlights some problematic aspects of the “she would never commit suicide” narrative. This short article by Danielle Stevens cautions that we should not assume we know someone’s mental health state, nor reinforce the “strong black woman” stereotype, nor stigmatize those who attempt or die by suicide. She also emphasizes that the state is responsible for Sandra Bland’s death, regardless of whether it was suicide or not.

I use the phrase “die by suicide” rather than “commit suicide” on the advice of this resource guide, which is geared toward LGBT communities but generally applicable to discussion of this difficult topic. I’m no stranger to suicidal ideation, and I did make one near-attempt several years ago, so the dialogue regarding this topic is of concern to me personally. (Yes, I am in therapy, and no, I’m not seeking sympathy or advice.)

Regardless, I, for one, am not joining the “If I Die In Police Custody” hashtag, because I honestly cannot predict what I would do in that situation. As a black trans person, I’m scared to death, almost literally, to go to any prison. I do not belong in a women’s prison, and I can’t imagine I’d survive in a men’s prison. I’d likely be a prime target for rape in either case, if I weren’t put into solitary confinement “for my own protection.” As I’ve posted previously, this legitimate fear of arrest has limited my activism.

Waking up to the true reality of white supremacy, while simultaneously battling against cissexism and speciesism, has been nothing short of shattering. I could turn off the Internet to stop reading the stories of yet another black person being murdered by the police, but it won’t change the situation. And my skin color does not give me the luxury of ignoring racism. This post by Mikael on “Awakening and getting off the Kool-Aid” sums it up:

And then there comes that moment, so important in the lives of all POC. That moment when the illusion you have built up your entire life shatters. That moment when you realize all of the lies you have been told… even by your own friends and family. That moment when you see the ugly of racism and oppression staring you in the face, and you realize how painfully real they are in your life, and how they stretch out far beyond your immediate surroundings and encircle the world, hurting so many other people both like and unlike you.

That moment when, for me, I finally realized that no matter how hard I worked, I’ll forever and always just be another nigger in the eyes of the world.

And that is the moment, so important in the lives of all POC, when we finally awaken. That moment when we finally “get” these issues and finally get off the kool-aid of white supremacy.