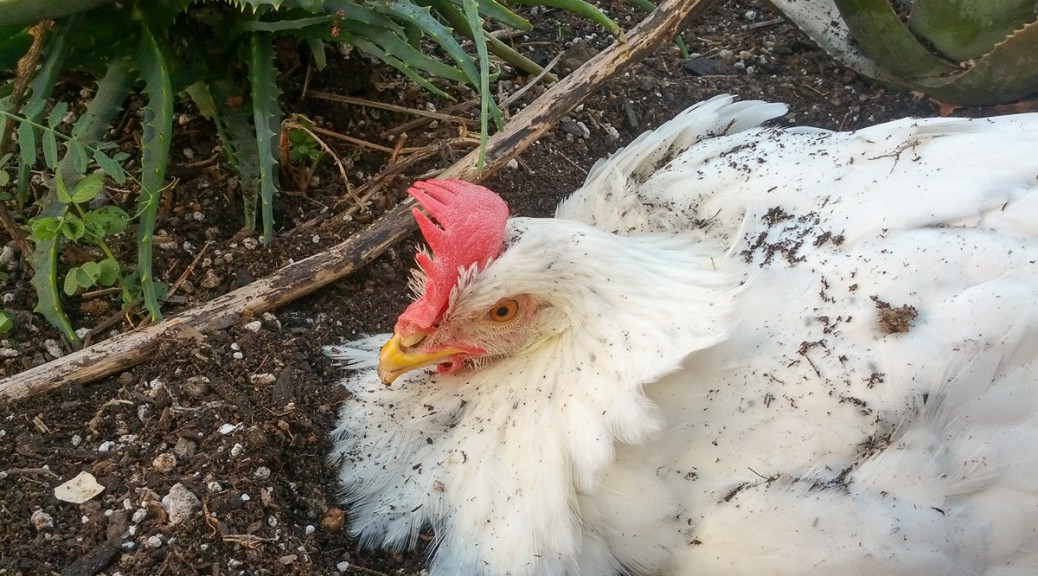 [Image: Snow, a hen with white feathers, relaxes in the dirt.]

For years I was afraid to speak out about veganism. When going to restaurants, I made sure to let my non-vegan friends know that I was just fine with them ordering meals containing animal products. I happily shared vegan recipes and baked goods and talked about why I was vegan if people asked, but I rarely talked about animal rights. I didn’t even believe non-human animals should have rights; if anything, I bought into the humane welfare myth, saying that I was only opposed to “factory farming.”

Everything changed last year, as I talked about in my essay on abolitionist veganism. I no longer saw veganism as a diet, but as a moral stand against violence. I now saw animals as people, not property. I could no longer look at someone’s dismembered body on a plate with dispassion. Once learning that dairy and egg farming, even in backyards, involved just as much suffering and death as farming for flesh, I could no longer see vegetarian food as in any way more ethical than flesh foods.

So I stopped my “live and let live” attitude, because the 60 billion land animals and trillion sea animals slaughtered annually for food wanted to live just as much as I did. I set up a table at the Free Farm Stand, where I did volunteer work giving free locally-grown food to people in need, and I started telling people the facts. I handed out materials from The Abolitionist Vegan Society and the Peaceful Prairie Sanctuary. I gave information on plant-based nutrition, plant-based clothing, and products not tested on animals. I made it clear that I was opposed to all exploitation, human and non-human. and that I was speaking from the perspective of someone who was part of multiple oppressed groups (being queer, black, and trans, and a survivor of sexual abuse).

I do think I made some inroads. Many people I spoke with, at the Farm Stand and elsewhere, thanked me for the information. Many said that they had no idea that male chicks were routinely killed in egg production, or that cows were forcibly impregnated year after year to produce milk.

But over time, I grew frustrated. I realized that many people who had no financial or physical barriers to going vegan were simply not going to do so, no matter what information I gave them. Speciesism was so entrenched in our society that the idea of seeing a chicken, cow, pig, or fish as a person, worthy of allowing to live for their own sake, was unthinkable to most people. If there wasn’t something in it for humans – weight loss, health benefits, etc. – they could shrug and continue exploiting animals for food, clothing, and entertainment, without fear of censure from a society that tells vegans to “live and let live.”

Ultimately, I decided that vegan education through leafletting and one-on-one conversations was not enough. This education was necessary, but not sufficient, for animal liberation. I knew that direct action was controversial, but I felt it was effective if nonviolent and done properly. Direct Action Everywhere appealed to me as they were founded and led by people of color, and targeted restaurants and stores who marketed the “humane myth” – such as Chipotle and Whole Foods Market – for their demonstrations.

At DxE actions, we are breaking the social taboo of interrupting people while they are eating and shopping, to make it clear that we are opposed to the casual everyday violence that our society calls “breakfast,” “lunch,” and “dinner.” We are amplifying the voices of people like Snow, the hen pictured at the top of this post. She is someone, not something.

My animal rights activism, and participation with DxE in particular, makes a lot of people uncomfortable. I’ve lost friends over this. I’ve been avoiding social gatherings where the bodies, eggs, and milk of animals are eaten, even if there are “vegan options,” because I no longer want to be complicit in the mass slaughter. If people are offended by my consideration of non-human animals as people and by my calling the exploitation of these people violent, so be it. My very existence as a queer black trans person is offensive to many.

As I suffer from depression and dysphoria and sometimes find it difficult to leave the house for days at a time, I have not been able to participate in as many animal rights actions as I would like. (I’ve put my volunteer work at the farm stand on hold for the same reason.) At actions where police are likely to be called, I feel more at risk because of my skin color. As a result I stay mostly behind the camera. But I do try to speak out when I feel safe enough to do so, most recently near the end of our “We Are All Animals” action earlier this month. [Image: Pax, the author, speaks out while holding a sign reading WE ARE ALL ANIMALS. Photo by Alicia Santurio]

I don’t expect every vegan to participate in direct action, whether or not they have the physical and mental capacity to do so. (Online activism is valid; criticizing people for being “armchair activists” is ableist.) Some may prioritize other worthy social justice issues, and join demonstrations against police violence or gentrification. I do not see these causes as being in conflict. All oppression is interconnected.

What’s more important to me is that vegans stop being embarrassed or afraid, as I was, to speak with their friends and acquaintances about the exploitation of our fellow animals. As demonstrations grow in size and the public sees more people taking animal rights seriously, more people will feel empowered to discuss these issues at the dinner table, rather than just smiling when someone eats another person’s body in front of them.

I seek to live in a world where non-human animals are no longer considered property. I cannot hope to achieve this goal solely by being a polite, inoffensive vegan sharing recipes and baked goods . On days when I cannot march on the streets, I will disrupt with the written word. If you agree, please join me.

8 thoughts on “I cannot “live and let live””