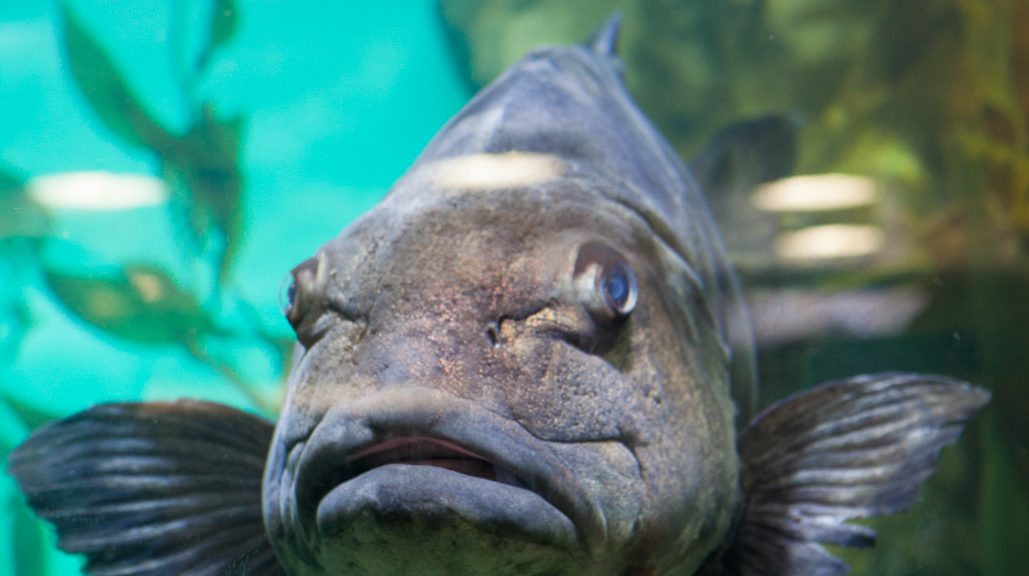 [Image: Head-on view of a large fish swimming in an aquarium.]

Thanks to a post from the Food Empowerment Project, I learned that today, June 8, is World Oceans Day. Respecting our oceans— sometimes referred to as the “lungs” of the Earth— is crucial, but often centers on a “sustainability” that is entirely human-focused. Our planet’s oceans, rivers, and other bodies of water are home to trillions of animals, but most humans consider them mere “seafood,” or living art pieces to be imprisoned and admired from the outside of a glass aquarium.

I’m not speaking here of subsistence fishing by indigenous people. Although I do not condone the unnecessary and avoidable killing of any animal, in some communities survival on plants alone is very difficult. It is for this reason, and not out of respect for “traditions,” that I confine my comments here to the killing of fishes and other sea animals by humans who have plentiful access to plant-based foods.

Even before I went vegan, it always bothered me that many people considered the eating of fishes to be appropriate for vegetarians. Fishes and other sea animals are sentient beings who feel pain and experience fear. Fish Feel* has more information on these misunderstood animals. There are perpetual arguments even among vegans about whether certain animals such as oysters should be considered sentient, but the vast majority of the animals we kill for food certainly are.

I eventually realized that part of why many self-described vegetarians eat fishes is not because they don’t consider them to be animals, but because they are vegetarian for health reasons. Many consider the flesh of sea animals to be healthier for humans than the flesh of land animals. I could cite many resources to the contrary, but I would rather focus on the ethical arguments here, because veganism is not a diet.

I use the word “flesh” deliberately, because referring to our fellow animals with such terms as “meat,” “poultry,” and “seafood” reduces them to objects. Objects are exactly how most humans view members of other species; property to be owned, used, and discarded as we see fit. This mindset is especially prominent in Western cultures, but exists worldwide. Regardless, “respecting” animals—whether from the land or sea—means nothing to them if they are dead.

I recall several times when my desire to speak up for fishes was suppressed by social expectations. About twenty years ago, when I was gathering quotes from caterers for my first wedding, I made it clear we wanted the food to be all vegetarian. One of the caterers offered a menu that included the bodies of sea animals. I explained to her that this food was not appropriate for vegetarians. She responded, “So the others will have nothing, then?” (As if a flesh-eating human could not go four hours without eating the body of another animal.) I didn’t argue; I simply went with another caterer, even though her quoted price was higher.

Another incident around that time: I was at a restaurant with my grandparents and my then-partner. The restaurant had fish bodies lying on ice in a display case. My grandmother expressed how beautiful one of the fishes was. All I could think was how much more beautiful that animal would be if they were still alive and swimming freely in the ocean. But I was sitting at a table with three non-vegetarians, so I said nothing.

In a more recent incident, after I had gone vegan, I was at a party when an acquaintance came up to me and a friend (both of whom knew I was vegan). She excitedly exclaimed how during a recent vacation, a local had killed and prepared a fish especially for her birthday. Shen then paused and said something to the effect that I wouldn’t appreciate this, which was true. But I really didn’t know how or whether to express my disapproval, so I was silent.

I regret that my social awkwardness and other factors have prevented me from speaking out more for my fellow animals, but this blog is one way that I can do that from the relative safety of my home. It really does bother me when humans treat other animals as objects, whether for consumption, clothing, entertainment, or any other purpose. That applies to fishes as much as anyone else.

So on this World Oceans Day, please respect sea life by going vegan. Animals are people, not property, and like us, they just want to live.

* Linking for information only; I do not endorse this organization.