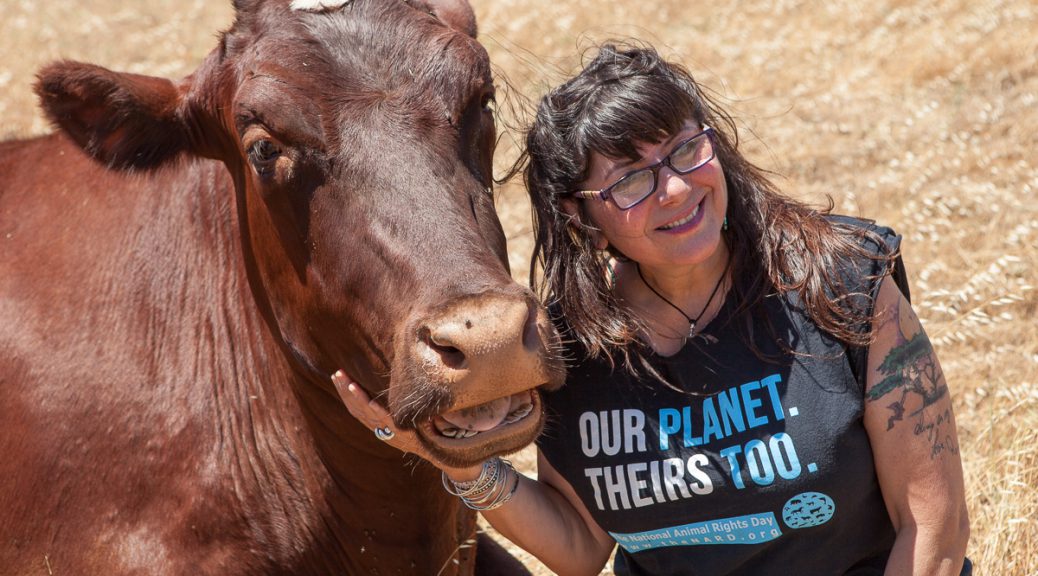 [Image: Close-up of a cow, Mahalakshmi, posing for a photo with a human, Lucia. Lucia wears a T-shirt reading “Our Planet. Theirs Too.”]

This Sunday, Ziggy and I braved a 96 degree air temperature to attend The National Animal Rights Day at PreetiRang Sanctuary. I’d first attended this annual day of mourning and awareness last year in downtown San Francisco, where I took some photos in an unofficial capacity, some of which made it into the video of the event. This year, the event was moved to a private vegan animal sanctuary due to financial and safety concerns. Ziggy agreed to run sound, and I agreed to take photos as long as I was not the sole or “official” photographer. [Image: A human with long red hair and a T-shirt reading “Our Planet. Theirs Too” holds the body of a dead squirrel.] [Image: A human with short black hair and a T-shirt reading “Our Planet. Theirs Too” holds the body of a dead chicken.] [Image: Several humans stand in a field, each holding a flower and the photo of an animal.]

The bulk of the ceremony consisted of participants holding the bodies of dead animals while the stories of how they lived and died were read. Other participants held photos of living animals. The dead were then gently wrapped in cloth and placed on the ground, and those holding flowers were invited to place them atop any animal whose story was particularly moving to them. [Image: A grave marker, dated 5-30-15, is adorned with flowers. The plaque reads in part: “We’re sorry we couldn’t save you. We will never forget you.”]

After the ceremony, the participants buried the dead in a grave, alongside the animals from the 2014 and 2015 ceremonies. [Image: People write their names and messages on a large scroll of paper.] [Image: A large piece of paper with a Sharpie pen and messages written in various colors, focused on the message: “Animals are people, not property. – Pax”]

[Image: A large group of people stands behind a banner reading “The National Animal Rights Day”.]

Next, The Declaration of Animal Rights was read, and everyone was invited to sign it. We finished the formal portion of the event with a guided meditation, followed by a group photo. [Image: Ziggy, wearing a purple shirt, poses with Gandalf, a goat, and Hari, a bull.]

While I questioned the wisdom of moving the ceremony to a private venue at first, the value of having it at PreetiRang became clear when we got to spend time with the living, rescued animals who reside there. It was lovely seeing how much some of them had grown since my previous visits, particularly the young bulls Harvey and Hari, the latter of whom loved photobombing whenever Ziggy and I tried to get a photo with Gandalf the goat. (Hari also ran off with an audio cable while Ziggy was setting up the speaker before the ceremony.) [Image: Luv, a goat, sniffs one person’s hand while a child kisses Kush, another goat, on the forehead.]

Shiva also looked fetching in his shorter, summer coat. And everyone continues to love Luv and Kush.

My full set of photos from the event is on Flickr. Please credit me as Pax Ahimsa Gethen if you use any of them, thanks!