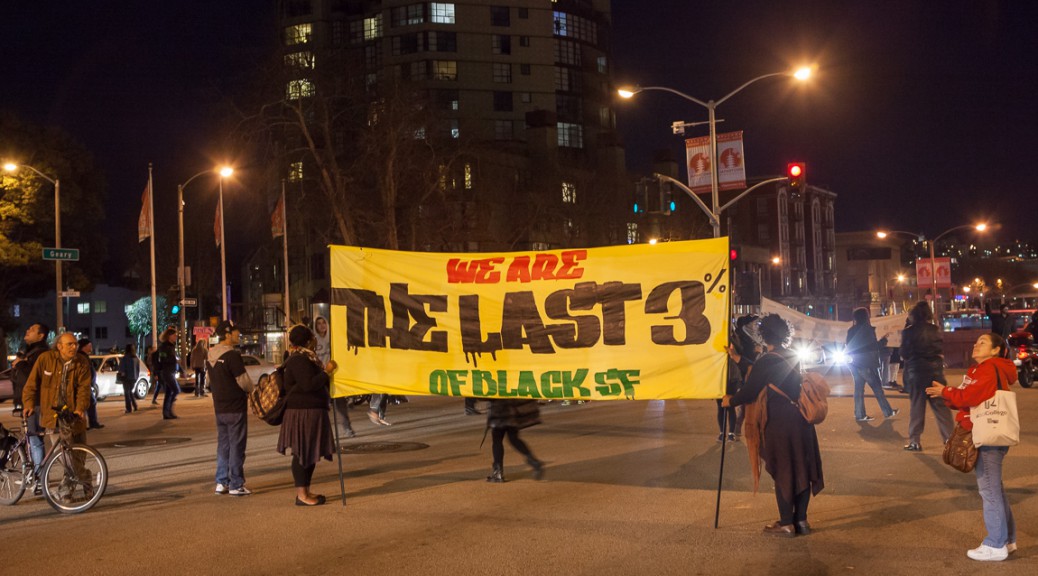 [Image: Protesters block an intersection, holding a large banner reading  “We Are The Last 3% Of Black SF.”]

I debated whether to write this essay because there’s been a lot of in-fighting in animal rights and vegan communities, and I want to encourage positive contributions and collaborations rather than just criticism. But I feel it’s important to call out—and call in—our fellow activists when oppressive language or tactics are used, in order to make the movement a safer space for marginalized humans.

With that in mind, I have serious problems with yesterday’s blog post by Ana Hurwitz for Collectively Free, entitled “Bernie Sanders: A Nazi On Animal Rights.” I feel strongly that the word Nazi should only be used to describe actual Nazis, who have committed unforgivable atrocities against millions of people. Yes, I do consider non-human animals to also be people, and humans do commit atrocities upon them by the billions. But the vast majority of the population does not yet see animals this way. Therefore, singling out a politician—a Jewish person, no less—as a Nazi for treating animals no differently from every other mainstream US-American politician is more offensive than provocative, and does not advance the cause of animal rights.

I recognize that the author of this piece is Jewish, but I do not feel this makes her immune to criticism. I have Jewish ancestry myself, which is part of why I find any comparison—casual or serious—to Nazis to be alarming and disturbing. I wouldn’t even call Donald Trump a Nazi, and he (“allegedly”) has open supporters of the KKK and other white supremacist groups at his rallies.

Speaking of rallies, in response to criticism of this blog post on their Facebook page, Collectively Free has posted numerous links to a post about BlackLivesMatter activists disrupting a Sanders rally, as justification for their actions. As I’ve posted before in reference to that disruption, I feel that non-black people—including other people of color—have no business telling black folks who we should support or how we should protest. But I feel it is inappropriate and disingenuous for that protest to be brought up in this context, particularly by non-black people. The black activists who disrupted Sanders had a reasonable expectation that he might heed their words and make changes to his platform accordingly. Collectively Free has no reasonable expectation that Sanders—or any other mainstream presidential candidate—will promote animal liberation in response to their demands.

What’s more, what appears to be the original motivation for this criticism—which has included a disruption of a Sanders rally as well—is also disingenuous. A month ago, Direct Action Everywhere (which is a separate group from Collectively Free, though there is some overlap in supporters) posted on their main Facebook page a meme of Bernie Sanders smiling with the words “AMERICANS LIKE BACON!” emblazoned over his face. This was in response to a CNN interview with Sanders’ wife Jane, regarding a conversation she overheard between Sanders and Russell Simmons, who now endorses Hillary Clinton. As I posted in a comment on Zach Groff’s blog, DxE’s framing of these words as if they were direct quotes and as if Sanders were gleeful about killing animals was why I had a problem with the criticism; it wasn’t because I support Sanders (to reiterate, I support no presidential candidates) or felt that he should be beyond criticism. Unfortunately, Collectively Free has now added their voices to what I feel is an ineffective and polarizing campaign.

As I said at the outset, I wish to encourage positive action and not merely criticize other animal rights organizations. I welcome constructive comments from others on this blog, whether or not you support Collectively Free or DxE. I am particularly interested in hearing from black vegans on the BlackLivesMatter comparison, and from Jewish vegans on the Nazi comparison. I do not claim to speak for all black vegans (and certainly not for Jewish vegans), but I feel that too often groups hold up members of other marginalized groups (including other PoC) as evidence of solidarity with black liberation, without recognizing that the challenges faced by blacks in the USA are not all interchangeable with those faced by other oppressed groups— including our fellow animals.

35 thoughts on “Human/animal liberation and the limits of comparison”