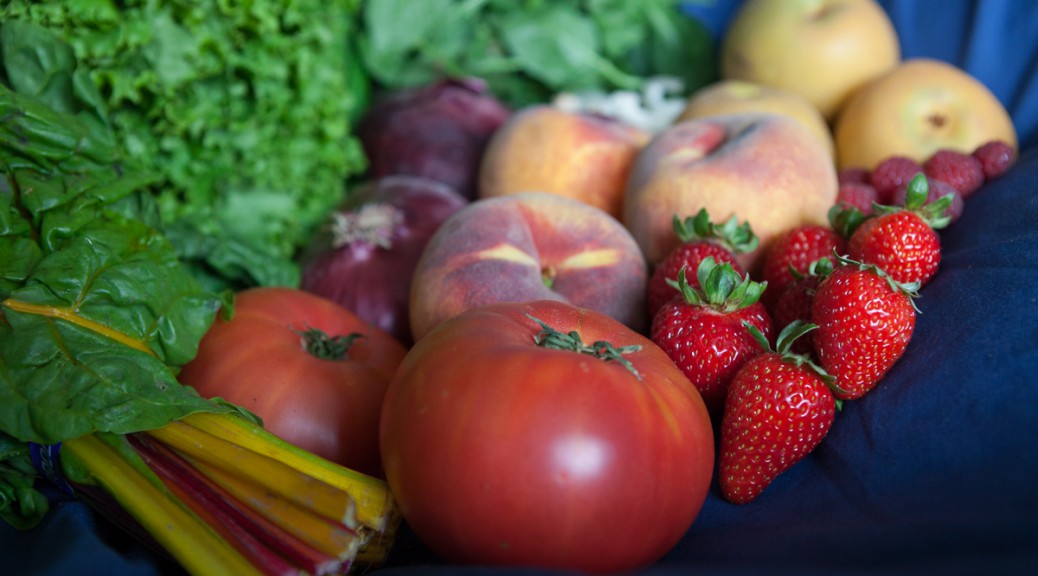 [Image: A pile of fresh fruits and vegetables.]

Today marks the beginning of VeganMoFo, which I participated in last year and in 2012. After giving it some thought, I’ve decided not to join in this year, for the reasons I stated in last year’s concluding post:

I haven’t been as enthused about participating this year because I think my goals, diet, and attitude are too different from those of the organizers and the majority of the participants. The daily round-up posts and giveaways have focused largely on vegan versions of animal-based foods, especially cheeses, and packaged products.

As I’ve mentioned previously, I don’t think there’s anything inherently unethical about eating plant-based substitutes for dairy and flesh, but they are not my focus. Many are expensive, not widely available, and not particularly healthy. And even some “naturally” vegan products, like dark chocolate and palm oil, may be produced in ways that are particularly damaging to farm workers, animals, and the environment.

The idea that “vegan food” is a special class of cuisine contributes to the utterly false notion that plant-based diets are more expensive than those containing animal products. Potatoes and yams are vegan foods. Grains, beans, and lentils are vegan foods. Frozen vegetables are vegan foods. These are inexpensive and can be prepared in quantity, with minimal time commitment.

Fresh fruits and vegetables are, of course, also vegan foods. These can be more expensive and difficult to obtain for some people. This is the main reason I did volunteer work in food justice, growing and distributing fresh produce to the needy. I’ve had to put that work on hold, but I encourage others to explore similar opportunities in their areas, and seek political change to make these foods more accessible.

What about food deserts? What about those who are homeless, have no kitchen access, or work so hard that they have no time to cook? These are legitimate concerns. But they are not going to be solved by funneling more time and money into creating the best-tasting vegan cheese, or vat-grown meat. We should be dismantling the intersecting systems of oppression that create poverty, homelessness, and food deserts in the first place.

As my depression has worsened, I’ve had less energy to devote to cooking, and have been more reliant on prepared foods. So I’m sympathetic to those who value convenience. But I’m not sympathetic to human convenience taking priority over an animal’s life.

Until humans recognize non-human animals as people, not property, veganism will continue to be seen as merely a fad diet for privileged people. And I’m not interested in promoting specialty “vegan foods” for the benefit of humans. Vegans are not an oppressed class. Making healthy plant-based meals more accessible to humans who actually are oppressed is a worthwhile endeavor. But we should never forget that every meal containing flesh, milk, or eggs cost a sentient being their life.

One thought on “Vegan food”