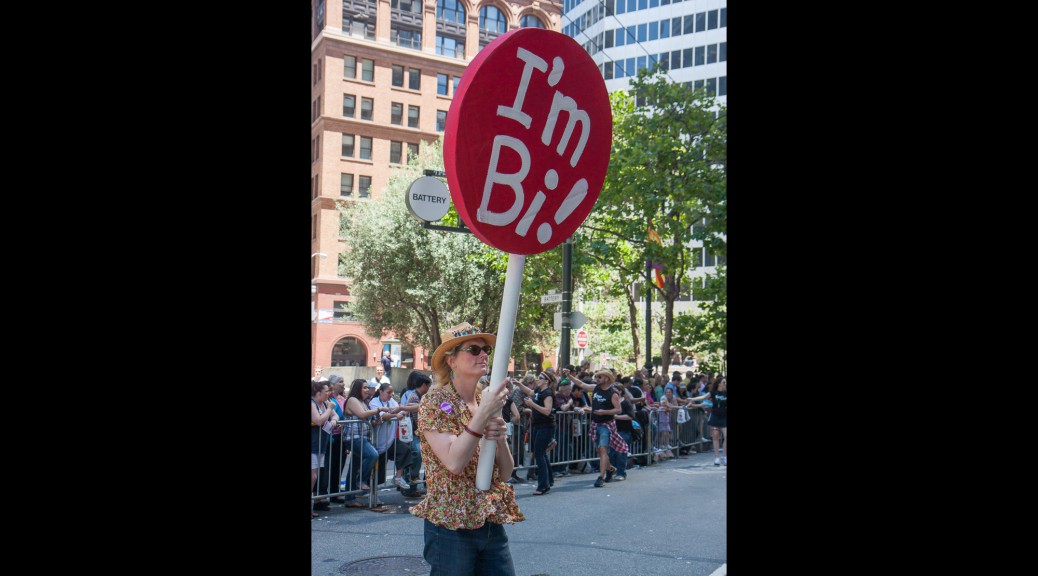 [Image: A person stands on a street in a parade, holding a large circular red sign reading “I’m Bi!” in white letters.]

The other day I was listening to a work by the late great Leonard Bernstein (Mass, for the record*), and I started perusing his Wikipedia page. I learned that there is debate over his sexual orientation. It’s pretty clear he wasn’t straight, but some, including his ex-wife and a friend, have said he was gay, while others claim he was bisexual.

As a Wikipedia editor on the LGBT Studies task force, I know the importance of self-identification for sexual orientation (as well as gender identity). For living people, the standards are clear: We do not label them as being anything other than straight unless there is documented evidence in reliable publications that they self-identify otherwise. For historical figures, it can be a bit more difficult.

Wikipedia currently categorizes Bernstein under bisexual men and bisexual musicians. I admit that this makes me happy as a former bisexual (I now identify as queer) who is very mindful of bi erasure. I’ve known a lot of bisexuals in opposite-sex marriages and long-term relationships who were presumed to be straight, myself included (before my transition), and some in same-sex relationships who were presumed to be gay. Some did not mind this, as they were not publicly out as bi, which is their right of course.

But for myself, I felt I had to make a point that I was bi, or have my identity erased. This was even more challenging for monogamous bisexuals, who also did not like the assumption that bisexuals all sleep with “anything that moves.” While I and many of my bi friends are polyamorous, being poly is no more inherent to bisexuality than to monosexuality.

So when I was active in the bisexual community, I encouraged people who I thought were bi to come out as such. I didn’t think there was anything weird or shameful about being bi, since so many of my friends were. I thought it was just obvious that most people were somewhere in the middle of the Kinsey scale rather than completely hetero or homosexual, and that we should all embrace our bisexual potential instead of being forced to choose sides.

Since learning more about gender and sex in the course of my transition, I’ve realized the error of my ways. Sexuality is much more complicated than the Kinsey scale implies. I cannot and should not assume anyone’s sexual identity from their behavior or even stated preferences, nor should I pressure anyone to “come out” or identify with any particular label. How a person labels their sexual orientation is for them and them alone to determine. No one else.

I still feel that bi erasure is a big problem, however. I was literally yelling at the screen while watching the first season of Orange is the New Black, as it seemed obvious to me that the central character was bi, yet the writers refused to use the word. The woman whose memoir the series was based on, Piper Kerman, has clearly self-identified as bisexual, so the description of her as an “ex-lesbian” without acknowledging her bisexuality was infuriating to me. (Of course, the series is hardly a realistic depiction of prison life either, as many critics have noted.)

I’ll close by re-iterating that we shouldn’t just throw out all the labels. Labels are useful to help us understand our sexualities better, and find mutual support. But they must be self-chosen.

* Despite being an atheist, or perhaps because of it, I find myself drawn to musicals with Judeo-Christian religious themes. Jesus Christ Superstar, Godspell, and Joseph and the Amazing Technicolor Dreamcoat are some of my favorites. 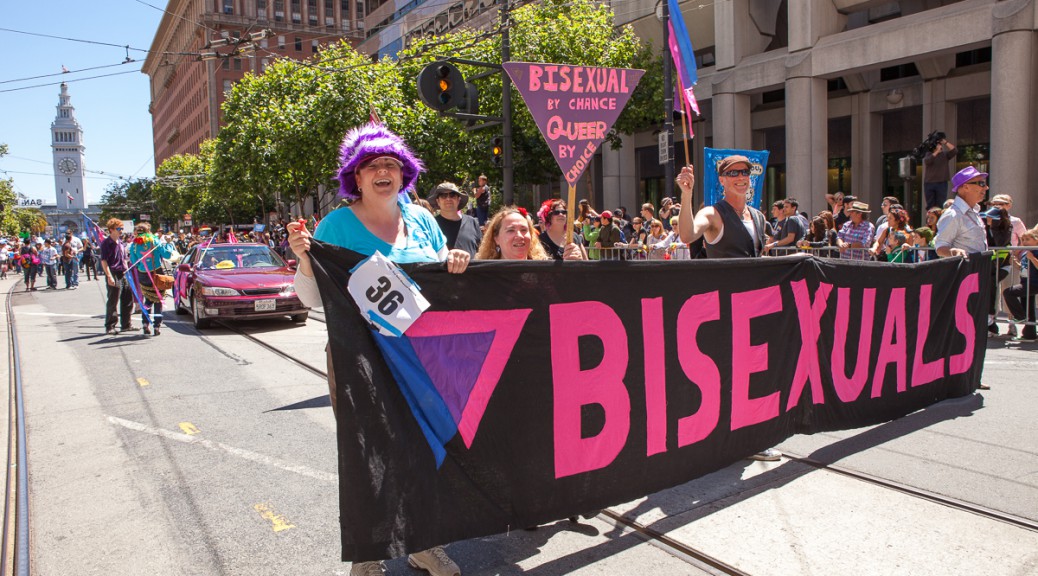 [Image: Smiling people parade along Market Street in San Francisco. They are holding a large banner reading BISEXUALS, in pink text on a black background, with pink and blue triangles.]

It seems not a week goes by that I don’t see the Bisexual vs Pansexual debate flare up somewhere on social media. I have many thoughts on this issue, but they are too detailed and nuanced to share as comments whenever this topic comes up. Hence, this blog post.

Soon after I entered puberty at the age of 11 (while being raised as a girl), I realized that I was physically attracted to both typically-male and typically-female bodies. This was 1981 and I was living in West Virginia; I didn’t know any openly gay or bisexual kids, and I couldn’t just jump onto the Internet to learn about sexuality (or gender identity for that matter). We moved to Pittsburgh the following year, but even in high school I didn’t make any openly non-hetero friends. I also realized that romantically, I was really only attracted to boys.

By senior year of college, I had still only dated men, but my attraction to women hadn’t abated. I decided to come out as bisexual. I moved to the San Francisco Bay Area in 1992, and began dating women as well as men. I also came out as polyamorous. I became active in the local bisexual community, attending meetups and marching in the Bisexual contingent of the Pride Parade.

All this time, I understood bisexual to mean “attracted to men and women”. This definition did not necessarily exclude trans people, as binary trans people are simply men and women with a different birth designation. But I knew very few trans people at the time, and nonbinary identities weren’t even on my radar. However, I did know a few people who identified as pansexual, which I understood to mean “attracted to people independent of physical sex characteristics”.

Remember, this all was before widespread Internet access; I couldn’t just browse Tumblr or other social networks to learn how others defined these terms. But I was also living in the San Francisco area, not West Virginia anymore, so I wasn’t completely sheltered from people with non-mainstream sexual orientations or gender identities.

Meanwhile, I wasn’t having much luck with women romantically, and realized my attraction to women almost purely sexual, and limited at that. Living as a cis woman, I might more accurately have described myself as heteroflexible. But the word “hetero” just did not work for me. I simply could not imagine myself as straight. And trying to break down my orientation into components like “bisexual but monoromantic” seemed too cumbersome.

By the year 2013, I realized that I was not a cis woman; I was a trans male with a nonbinary gender identity (which at the time I described as genderqueer and transmasculine, before later amending that to agender). As I still thought of bisexual as meaning “attracted to men and women”, I saw that label as unacceptably binary, for myself. Coupled with the fact that my attraction to women was almost purely physical, I decided that term didn’t fit me anymore. For purposes of sexual orientation, I announced, I was basically a gay male.

This bothered me, not so much that bi people had this expanded definition of their orientation, but that some implied that bisexuality had always been defined this way, and that anyone who thought otherwise was being biphobic. I could see a young person who never knew life without constant Internet access maybe thinking that way, but I was middle-aged and hadn’t grown up with this privilege.

I especially didn’t like bisexuality being defined as an umbrella term that encompassed pansexuality. People who defined their orientation as pansexual under the thought that bisexual is a binary term might not so readily embrace the idea of being labeled as bisexual. It seems similarly problematic to using “genderqueer” as an umbrella term for nonbinary-identified people, though in the latter case there is the added problem that “queer” was a slur, and not everyone has reclaimed that word. I’m fine with bisexuality being defined in the ways that it is now, but I think that it is still valid to have a separate pansexual identity.

In my own case, I finally decided to just identify as queer. Gay male was too limiting, given my nonbinary gender identity and the fact that I am still physically attracted to typically-female bodies. It’s sort of academic as I’m not seeking new sexual or romantic partners currently, though my spouse and I remain polyamorous. But I’m not willing to throw out all the labels. Labels for sexual and gender identities are useful, but they must be self-chosen.