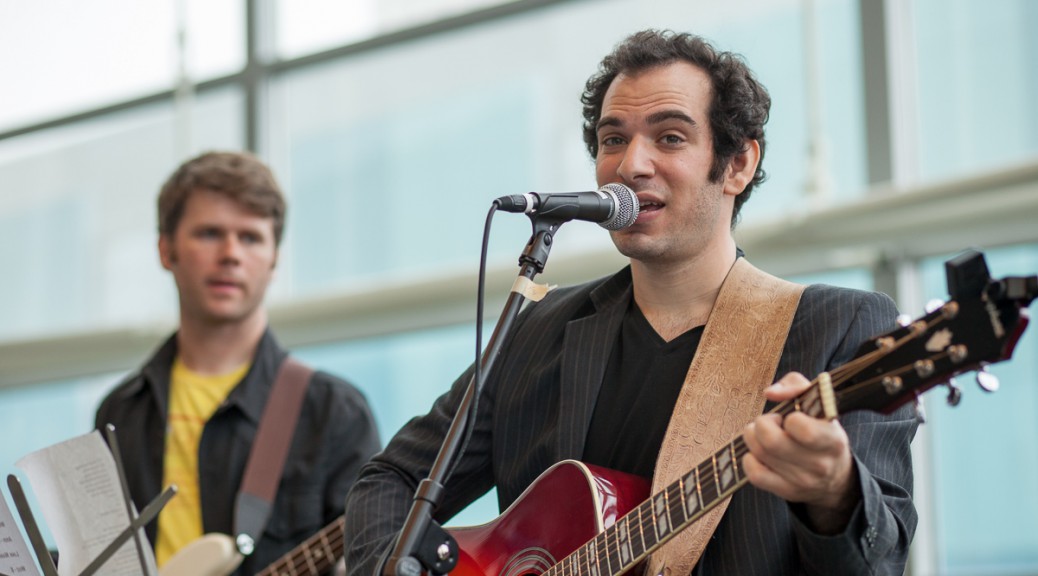 [Image: Jonathan Mann plays guitar and sings into a microphone.]

Back when I was first contemplating transitioning, I attended a couple of peer support groups for transmasculine and genderqueer people at the Pacific Center in Berkeley. One group discussion rule that I really liked was: Use “I” statements. That is, don’t give other people advice, just say what has worked for you.

I am spectacularly unqualified to give personal advice on most issues. I am also quite cynical by nature. Hence the question mark in the title of this post. “Follow your bliss”* is advice I hear given to artists a lot. Do what you love, and the money will follow. But will it really?

Being a financially successful independent artist, writer, or musician takes a huge amount of work, along with a fair amount of luck. Most need another source of income, either from another job or a family member. I envy those who can work a full-time or part-time job and still have the energy to do creative work on the side.

Partly due to worsening clinical depression, I found it impossible to do many hired photography gigs while still working a day job. I was fortunate to have family support for my living expenses and health insurance while I tried to get my career off the ground. Ultimately I realized I could not make a living as a photographer. But at least I didn’t go bankrupt trying, and as I still have spousal support I can try to pull in a little income through crowdfunding, as detailed in my previous post.

Lately I’ve also begun to realize that most of the people I’ve seen give advice to “work for love, not for money” are able-bodied cis white men. These privileges can be so invisible that most people don’t even realize they have them. It’s a lot easier to rely on the good will of others, to say “the universe will provide”, when you are self-confident, full of energy, and your appearance doesn’t ring any alarm bells.

One white cis male artist who does recognize his privileges is Jonathan Mann, the first person I supported on Patreon. He’s frequently written songs and essays about social justice issues. His dream is to make a living entirely from user contributions, but for now he has to write corporate songs to make ends meet. I admire Jonathan, who I saw in person several times when he was living in the SF Bay Area; the photo at the top of this post is from his performance at Macworld Expo in 2011, where we first met. I also had the fun of collaborating with Jonathan and dozens of other people in a video last year:

Later this week I’ll write about some of the other artists and writers I’m supporting, on Patreon and other crowdfunding sites.

* Follow Your Bliss is also the title of one of my favorite songs, by the B-52’s.